Air transport is one of the modes of passenger and freight transport in Nigeria. The large size of the country, coupled with its geographically diverse resources and resource potentials encourages extensive use of aircraft for speedy, long, and medium distance carriage. 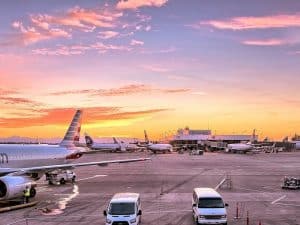 As a sovereign country located in West Africa bordering Niger in the north, Chad in the northeast, Cameroon in the east, and Benin in the west, the Federal Republic of Nigeria has four major international airports that convey travellers from the country to another country, be it within or outside the Africa continent.

As nature’s wishes, Nigeria has its southern coast on the Gulf of Guinea in the Atlantic Ocean and is comprised of 36 states of which the Federal Capital Territory, is in Abuja.

So, today I will provide you with the names of the international airports in Nigeria. 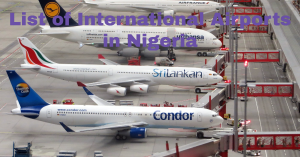 Built and commissioned over 40 years ago, in 1978 and located in Ikeja, Lagos State, Nigeria, Murtala Muhammed Int’l airport is one of the best international airports in the country and is the major airport serving the entire state.

The airport was named after Murtala Muhammed, Nigeria’s fourth military ruler, and was built during World War II.

The airport terminal has been renovated several times since the 1970s, but its most recent transformation began in 2013, following the launch of the Federal government’s multi-billion naira Airport Remodelling/Rehabilitation Programme for its airports nationwide.

In 2014, the airport lounge area was quadrupled in size, and new passenger handling conveyor systems capable of handling over 1,000 passengers per hour were installed.

Mallam Aminu Kano International Airport is an airport serving Kano, the capital city of Kano State of Nigeria. It was a Royal Air Force station before the country became independent. It is the main airport serving northern Nigeria and was named after politician Aminu Kano.

The airport is named after the late Akanu Ibiam (1906–1995), a medical doctor and statesman who hailed from Afikpo in Ebonyi State.

The Kaduna International Airport, located about 22 kilometres northwest of the city, was established and officially commissioned in 1982, with its first international flight taking place in March 2017.

The Federal Airports Authority of Nigeria (FAAN) operates the airport, which was recently upgraded in 2017 and now serves both domestic and international flights.

Unlike others, the Sam Mbakwe Airport is an international cargo airport in Imo State, Nigeria. It began operations in 1994, under the administration of former military administrator Navy Captain J.N. Aneke.

The Asaba International Airport was established and opened in 2013. It is located in the capital city of Asaba, Delta State, Nigeria, and serves Delta state as well as Onitsha, which is located across the Niger River in Anambra.

The airport was opened with high hopes, but it has since deteriorated and has been temporarily closed, necessitating extensive government intervention. 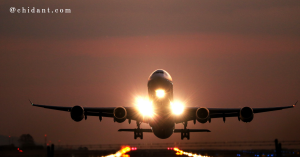 Other International Airports In Nigeria

Nigeria currently has eleven different domestic airports spread across various states. Their names and addresses are listed below:

This is one of the oldest domestic airports in Nigeria constructed in 1956 by the former Public Works Department (PWD) and upgraded in between 1975 and 1978 before it was finally handed over to the Nigerian Airports Authority (NAA).

This is also one of the eleven domestic Airports commissioned on February 16, 1978. It is located at Fili area of Ilorin, about 9km Southwest of Ilorin town.

Sultan Abubakar III International Airport, Sokoto was commissioned on February 17, 1982. It is located at South-south West of Sokoto.

The Sokoto Airport is mostly utilized during Hajj and Umrah trips by passengers.

The Yola Airport is another domestic airport in the country located at Jimeta, about 8km Northwest of Yola commissioned on the 27th October 1984. There was operation from 1978 until it was upgraded to an International Airport in 2002.

Ibadan Airport was commissioned in June 1982 by the former Senate President, Joseph Ways. It is located at Alakia, which is between Adegbaiji community and Iwo Road in Ibadan, Oyo state.

The Kaduna Airport is another one of the eleven domestic airports fully constructed and officially commissioned in 1982 under the management of the Nigerian Airports Authority (NAA).

This Airport is located about 12km from Kaduna Metropolis. The nearest community to the Airport is Isira Community.

Another domestic airport in Nigeria we have on the list is Katsina Airport which was commenced operation on the 22nd December 1991 located southwest of Katsina and about 4km from the metropolis.

The nearest towns and distances or sub burbs to the airport are Modoju 2KM, Makeva 3KM, and Kayanki 5KM.

The Maiduguri Airport is one of the airports that acts as both domestic and international airports mostly engulfed by passengers’ traffic during Hajj operations.

The Airport is located in the headquarter of Borno state, Maiduguri and it is also sub burb by Bulunkutu, Shiwari, Shelmari and Muronti communities.

Makurdi Airport is known and acts as a domestic airport in Nigeria commenced operation in 1983 presently located at Fili along Makurdi – Gboko Road, Benue State.

Akure Airport is also a domestic airport located in the city of Akure, Ondo state-commissioned/established on 8th February 1986.

Related>>>How To Travel Abroad From Nigeria

4 Common Mistakes Made by Travelers You Must Avoid

How to Start Airport Shuttle Business in Nigeria (2022 Guide)

If this article helped please don’t forget to like or share with friends. Your comments will be much appreciated

✔✔ Ask Awajis
Highest Paying FG Parastatals in Nigeria – What are the Highest Paying FG Parastatals in Nigeria? It’s a…
bblog
Meaning of RSVP: Have you received or seen an invitation with RSVP before? Do you know what RSVP…
✔✔ Ask Awajis
This is to inform the general public and all JAMB candidates that the official list of colleges of…
✔✔ Ask Awajis
Close your eye and think of a world that styling of hair is not permissible, impossible! if you…
bblog
Hezekiah University School Fees… Here in this post, you will see the newly updated school fees schedule of…
✔✔ Ask Awajis
Best Law Firms in Lagos: Hey guys, I will bring the list of 7 top law firms in…