How much does the Nigerian Naira exchange for the Euro? In this concise piece, we’ll discuss the current exchange rate of Euro to Naira today and the reasons that accounted for this.

Before we proceed, it’s best to let you know that the above rates are subject to change unexpectedly. This is a normal situation as regards the FOREX market – it’s dynamic and fluctuates every minute. But we’ve given you an insight.

You might wonder why the official CBN rate is much lower than that of interbank and black market (aboki) or the Bureau De Change; this is simply because, the official rates is what the Nigerian government values the Naira at, while the parallel rates are the true valuation of the foreign currency in the open retail market or what we love to call black market.

The CBN can influence the parallel rates by further pumping more foreign currency to Deposit Money Banks (DMBs) but this can hardly be sustained and the huge divide remains.

Fun facts about the Euro You May Not Know 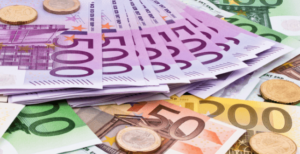 How much do you know about the Euro? Here are some facts you should know before we proceed.

Why is the Naira so poor against the Euro?

Nigeria is a sovereign country with a population of over 170 million people. The country boasts vast mineral resources including large deposits of crude oil. Add that to the favorable agricultural landscape and you begin to understand that Nigerian is a blessed nation. So it’s quite bewildering that such a nation would have a currency that performs so poorly against other foreign currencies – over N400 for one Euro. The reason for this is not far-fetched. We highlight them below.

As was earlier said, Nigeria is a country that’s immensely blessed with so much natural resources, not just oil. We have huge deposits limestone, Iron ore, lead, coal, columbite, bitumen and even gold. These resources are largely untapped, and even when they are, they funds go into private pockets instead of the economy. Nigeria has left most of the aforementioned mineral resources to lie fallow while all eyes are on the exploration of crude oil.
Overdependence on crude oil has threatened to bring the country to its knees economically. As a result, the nation’s currency has continuously been devalued.

2. Few exports and too much imports

What does Nigeria export besides oil? You have to rack your brains to answer that. A country cannot have a strong currency when it imports almost everything and exports next to nothing. As a nation, it’s alarming to note that Nigeria still imports frivolities such as toothpick, eggs, red oil, plantain, spoon, clothes and even premium motor spirit (fuel). It’ll be difficult to have a strong currency when we take so much and offer so little. See Dollar to Naira

3. Nigerians love for foreign made

We are also at fault in the sense that, most Nigerians will rather buy a foreign-made product than Nigerian-made. The few Nigerians who have managed to set up production industries are poorly patronized by their fellow citizens. Since we’d rather buy foreign goods, go to foreign schools, eat foreign foods and patronize foreign experts, we’ll always need foreign exchange and foreign currencies will remain superior to ours.

These unfortunate occurrence came as a result of colonial mentality, where our formal colonial masters encouraged us to consume anything foreign and avoid anything local as unhealthy. Even after the departure of the colonial masters, that mindset still remained with us.

4. Poor management of the economy

The government has a responsibility of bringing the economy back to life, but sadly, it has failed on so many fronts. Funds are constantly being looted by government officials while financial institutions are failing in their duties of making the economy robust. Businesses are folding up and recession has set in. the result is a gross devaluation of the Naira against other foreign currencies.

The Naira currently exchanges at over ₦592 for one Euro. We’ve showed you facts about the Euro but we’ve discussed in-depth why the naira has such a poor value compared to the Euro. You must now do your bit in making the naira gain some value by putting your knowledge into action.