If you ask me to summarize in one word what goes on in the NYSC Orientation Camp I would say ‘competition’. Seriously, when I looked over my days in the orientation camp I realize it was in one word ‘competition’, but this not to say it was one of a fierce and hostile competition, but it was a healthy kind that is organized to bring your one week camp experience as one of hearty memories.

Firstly, the programs in the orientation camp has been created in such a regime to train, educate and discipline the new graduates to be mentally ready for the task before them, to give them a last moment training or touch before releasing them to the job market. The program also tend to create a sense of unity among Nigerians through the youths. 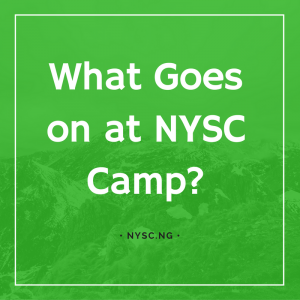 NYSC, who ever coined the idea, I would always say was a worthy ideal and idea. Now to make it more appealing or motivating to these youngsters the idea was expanded to be more of competitions. That being said nearly every activity in the orientation camp is a competition with a prize to win or a score to rise to.

Different Competitions in the camp

The following are the different competitions that can be found in the orientation camp.

The sporting activity is the most famous and widely recognized competition in the orientation camp. It attracts the largest audience and interest. It is performed with platoon’s competing against platoons.

The sporting activities include football for the guys, and volley ball for the girls. It is a great sight and a source of great admiration to see great talents who display their sporting skills. It is hard not fall in love with them. (I remember my camp where I was irresistibly following one k-leg girl because her sporting was superb, and now she was more like a star). It feels more like real championship game where spectators are full of support and cheering for their clubs.

After the game it can be moment of disappointment for some and can also be an uncontrollable joy for the winners.

If you have got the skills don’t deny yourself the chance to be there.

Every weekend every room and hostel is checked, and the rooms are graded according to their neatness level. These would require that corp members in the various  hostels or room dress their bed well on that day, place a neat bed sheet on their bed, clean up their bed corners and also tidy up their surroundings (that brings back to mind secondary school hostel days).

It is really a thing of great joy to see the name of your hostel been rewarded with a good position like first, second and third. Hostels that get the last position usually work harder the following weekend to come out best the next time.

In my camp because my area was the bungalow close to the soldiers we were always neat or at least rewarded a good position or else that would be an insult on the soldiers close to us.

Every day there is a rotation of platoons that do the cooking in the kitchen. Their cooking is done throughout the day covering breakfast, lunch and dinner. The platoons are thus graded and the best platoon for the week in cooking is then awarded with a good position.

Well it is much hoped that this competition in the kitchen side would motivate each platoon to work hard to bring the best out in the day of their cooking. Sadly though, a lot of corp members are still complaining about the poor meals in most orientation camp.

There is also a daily rotation of platoons that clean up the camp surrounding. The job would require picking up water sachet, cans and other stray disposables all around the environment.

It seriously not always an enjoyable one especially when guys are asked to pick around the girls hostel area. In fact in my time we simple refused doing that and asked the girls in our platoon to go and do it themselves, that we were not going to pick any of them girls dirty things that they do around their hostels.

Nearly every afternoon there seem to be an unending rehearsal of marching parade by each platoon led by the platoon soldiers. They can really be tiring and inconvenient for those who do not love the marching thing.

Most platoons select only those they feel are good during the selection process and train them for the competition ahead. The marching competition comes to a head at the last day of marching out. It is a great sight for corp members as the stand under the sun watching their fellow corpers participate in the marching competition. That reminds me that only four platoons are selected a day before the marching out day to perform and compete. The best platoon from the four is then selected for an award.

I learnt that the marching has something to do with the rank increase, award or image of the soldiers that win or lose. You can actually see them beefing each other after the marching competition.

The drama competition is quite an interesting one where you watch Nigerian graduates trying to create intelligent plots and also act them out.

Some platoons can really be disappointing. I can remember the one my platoon acted it was too poor we all had to cover our face in shame because it was glaring that it was a bad performance (we surely got last position for it).

I know a bit of creating plots for stories and dramas but I wasn’t in interested in the whole drama thing in the camp. I regretted why I didn’t join when we lost.

So in case you have something you can offer to your platoon during the drama or any other competitions please try to give out yourself. You don’t have to regret it like I do.

see: Being a Real Ajebutter in NYSC Camp

Like a compensation for our drama failure we got first in the dance competition in my orientation camp (YooPee!!!).

In some orientation camp there is debate competition. In my camp there was none and that was the only competition I was looking up to join. When there no mention of such in my camp, maybe that is why I lost interest in joining any of the competitions.

In the debate competition you can see where young people battle with words of mouth and astute decoration and maneuver of ideas and arguments. It is really a lovely sight to see.

The Miss NYSC and the MR. MACHO is another important competition among platoons. A lot of work and efforts are placed by those organizing this to bring out the most beautiful lady and most muscular guy in the camp.

You can be the one MISS or MR of your batch in the camp. Don’t be afraid; take it as fun and come up, you would never regret it. You can read more details on this wonderful competition in one of our previous articles.

The man o’ war activity is another competition on its own. In spite of the fun involved each platoon is graded and the positions are called later nearing the end of the camp.

In spite of the competition attached to it, the most important thing is that we enjoy it as fun. Corp members should try to take part in them. They can go a long way to bring extreme happiness, personal satisfaction and possibly better future opportunities that you never knew could come your way.