SPSS is obviously not an independent word that has a meaning of its own. It is an acronym having its meaning when fully spelled out. So, what does SPSS stand for? Read on to find out! 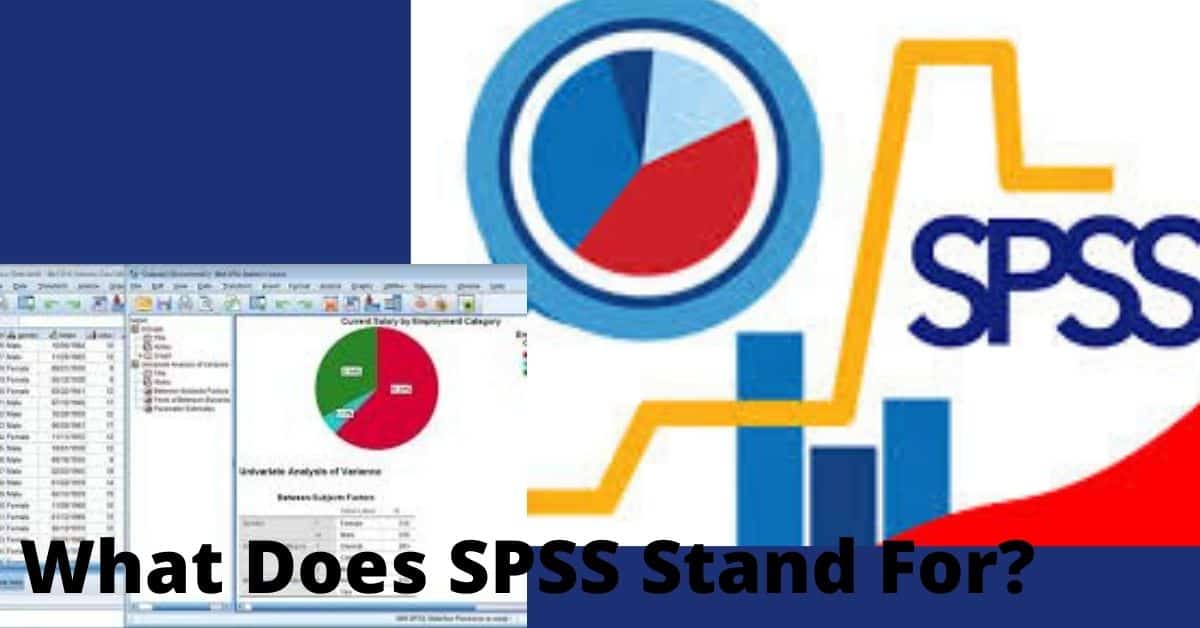 SPSS means Statistical Package for the Social Sciences. It was launched by SPSS Inc. in the year 1968 and purchased by IBM (International Business Machine Corporation) in 2009.

By means of its ownership by IBM, It is officially called “IBM SPSS,” although most of its users prefer calling it just SPSS.

SPSS as a system software was designed mainly for editing and analysis of all kinds of data. These data may come from basically any source; Google Analytics, scientific research, a customer database, or even the server log files of a website.

SPSS is used by a wide range of researchers and analysts, including;

This data analysis software has a unique data file format. It can also use other file formats which include; SQL, MS Excel, Stata, SAS, and plain text files.

2. To Make Charts and Tables

It could be boring at times to create tables and charts in SPSS because its charts somehow look ugly and unattractive and often have an awkward interface.

Nevertheless, this issue could be well handled by developing and applying SPSS chart templates, although this step may require great effort and skills.

3. To Save Data as an Output

As earlier said, SPSS can use file formats like MS Excel, plain text (.txt or .csv), Stata, and SAS. This is a plus because it makes outputted data as detailed as it ought to be.

Tables can be made using ‘rich text’ format since it gives the output the original tables layout, borders, and font, while charts can e copied and pasted as images in a png format.

Aside from going through the copy-and-paste process for individual files, files can be dubbed or transferred to HTML, MS Word, and even pdf format.

Creating an SPSS output file with beautifully structured tables and charts is an excellent means of writing a report.

You can further export the entire document to your MS Word, inserting explanatory text and titles between the output items.

Research works are believed to come with some traces of errors, and therefore editing is essential. In order words, raw data usually needs some editing before proper analysis.

For getting things done fast, SPSS contains many numeric functions, string functions, date functions, and other handy routines, which makes it very efficient.

SPSS is an excellent means of running inferential statistics because it comprises all the basic statistical tests and multivariate analyses.

Some analyses are only available after purchasing additional SPSS options together with the main program.  SPSS Commands.

SPSS has four main features. Let’s look at them below;

2. Data Analysis: This feature allows SPSS to open and display various kinds of data. One of the ways to do this is by SPSS elaborate menu option.

3. SPSS Variable View: SPSS data files usually have ‘variable sheets; these are second sheets that display the metadata associated with the data.

NB; Metadata is information about the meaning of variables and data values. It is generally known as the “codebook” but called the dictionary in SPSS.

4. Syntax Editor Window: This is more like a third window on the SPSS menu after working on other tables. Codes known as SPSS syntax are mostly typed on this feature.

5. Making Report: It is great for making reports. Items outputted from SPSS are usually copied and pasted in other Softwares such as MS Word.

6. Output Window: This window is needed after working on your data analysis. There are usually five options displayed on the bottom of your screen; the ok; Paste; Reset; Cancel; Help options, respectively.

In this case, all you need do is to click o ‘OK.’ This leads you to the output viewer window, which consists of a table with your variables and data.

Other Meanings and Use of SPSS

SPSS has been used in other contexts, they include;

That will be all for now. I hope this was helpful.

Kindly hit the share button for this. What does SPSS  stand for? article. We would also love to hear your questions and comments.

Airtel *444# Code | Everything You Need to Know