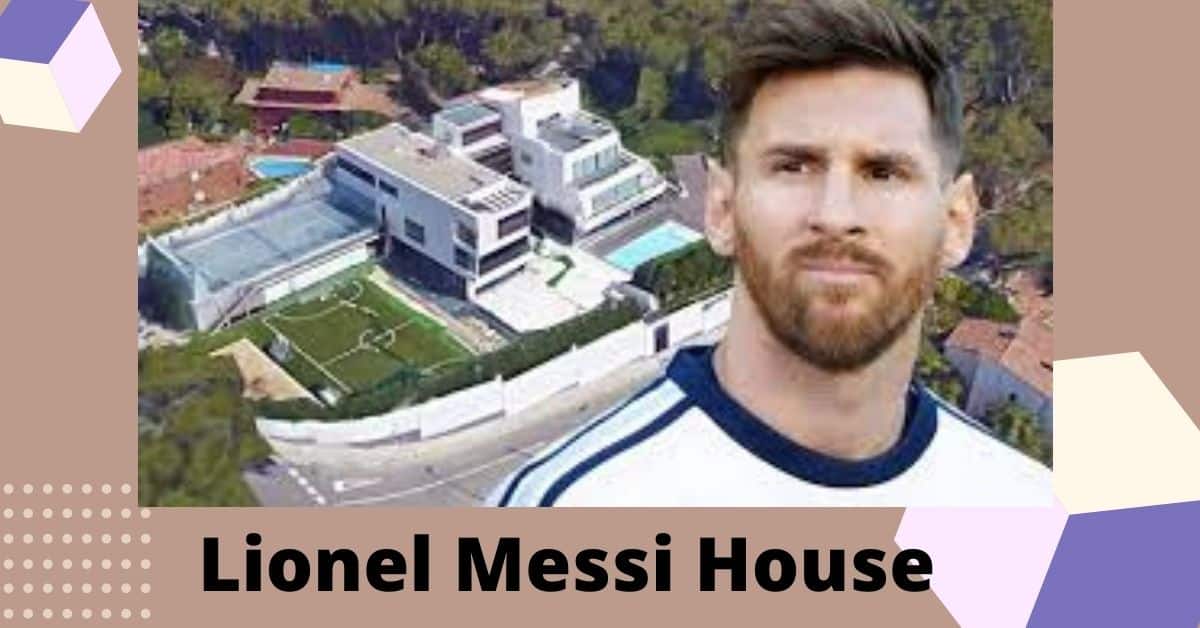 He tagged along when his two older brothers played soccer with their friends when he was yet a child, unintimidated by the bigger boys.

At the age of 8, he was recruited to join the youth system of Newell’s Old Boys, a Rosario-based club in 1995.

Messi and his family relocated to Barcelona when he was 13. Here, he began playing for F.C. Barcelona’s under-14 team. His breakthrough came through when he scored 21 goals in 14 games for the junior team.

He quickly graduated through the higher-level teams until at age 16 he was given his informal debut with F.C. Barcelona in a friendly match.

In the 2004–05 season (Messi was 17 then), he became the youngest official player and goal scorer in the Spanish La Liga which happened to be the country’s highest division of football.

Though he was just 5 feet 7 inches tall and weighed 148 pounds, he was strong, well-balanced, and versatile on the field. Naturally left-footed, quick, and precise in control of the ball, Messi was a keen pass distributor and could readily thread his way through packed defences.

In 2005 he was granted Spanish citizenship, an honour greeted with mixed feelings by the fiercely Catalan supporters of Barcelona. The next year Messi and Barcelona won the Champions League (the European club championship) title.

Lionel Messi, no doubt, is one of the greatest players in the world today. Some of his fans argued that he is actually the greatest.

With such earnings, it is not a surprise that such a renowned footballer should be living in luxury. For instance, Lionel Messi’s house in Barcelona is one that showcases his luxurious living.

Talking about Lionel Messi’s house, there have been some myths regarding this, that a lot of persons, including his fans, believed.

If you truly want to know the real substance about Lionel Messi’s house in Barcelona, then this article is just for you.

The Assumed Lionel Messi House On The Internet Is Fake

The 21st-century man believes in the things that are so popular.

Once you type the word “Lionel Messi House” on the internet, you are most likely going to see the mythical football-field shaped house that is popularly believed to be Messi house.

Hence, each time we think about Lionel Messi House, that beautiful picture immediately pops up into our minds.

That is called mental modelling, and it’s hard to remove such pictures we have already accepted as facts from our minds. 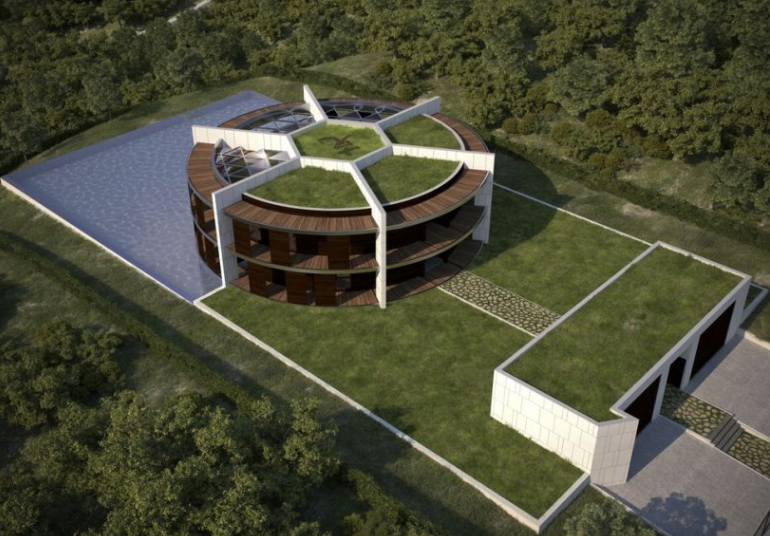 The picture of the house above is entirely fake as such a place does not exist anywhere in the world.

It should be noted that an architectural engineer developed this model, with the intent that it will fit for a person like Messi.

However, Messi neither knows the designer of this model, nor does he intend to build a house that is this big and iconic.

Responding to the myth that the above picture is Lionel Messi House, Messi’s father, Jorge Messi argues that neither he nor his son Leonel Messi knows the engineer.

They have no intention of owning such a house.

The statement proves the popular rumored Lionel Messi House on the internet as false. To further disprove this, you point, has anyone seen Messi on this his supposed house before on the internet?

Certainly not. He’s always pictured sitting on his real home, which we intend to show you in great detail presently. Then, where does Messi live? Let’s find out…

Where Does Messi Live?

At the moment, Messi lives in a small town in Barcelona called Bellamar.

It should be noted that the houses in this luxury quarters could be expensive, as each house within this locality in Castelldefels cost nothing less than £4.5m.

It can cost much more than this, depending on the size of the house. This locality used to be a low budget area until the likes of Messi decided to move to it.

This led to an instant increase in the price of properties around the axis, making it one of the most expensive locations within Catalonia. The pics below show the real Lionel Messi house in Barcelona.

In 2009, Messi spent €1.8M in the purchase of this used property and later spent some additional €6M fine-tuning the house to suit his taste and class.

The picture of the house above shows that the home is spacious enough to accommodate the legendary Messi and strategically placed in giving him the chance of viewing the beautiful hills in Catalonia panoramically.

Going a bit further into the house interior, one may expect much designs and decor, however, from the picture that will be shown to you presently, the inner decoration seems essential, but still serves the needs of the legend anyways.

The interior has a wooden flow, a light-coloured wall with this Mediterranean styling, a gym, and other basic needs that one would ordinarily expect to see in a professional footballer’s house.

As previously alluded, this iconic house has a lot of space where he can play around with his sweet wife Mrs Antonella Roccuzzo, his three kids as well as his two monstrous-looking dogs.

In this edifice, there is also a space provided, where his kids can use for their play, a lovely swimming pool, and also a small football pitch where he stays to keep fit.

The house may not be the sweetest looking house in Barcelona, but it got everything that Messi ever needs. 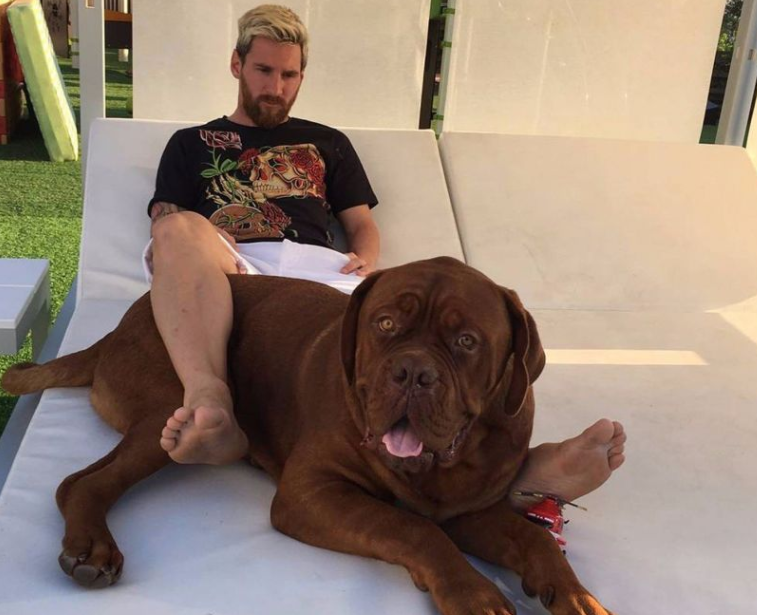 Going by the personality of Leonel Messi, we all know that he doesn’t like talking too much, nor does he like noise.

He’s a bit reserved. Unfortunately for this superstar, Messi wasn’t too lucky with the kind of neighbours he had around his home.

Ivan Rakitic, one of Messi’s teammates keenly observed that the neighbours that Messi has normally played out music very loud to the extent that it disturbs the peace of Messi and his family members.

How did Messi deals with this challenge? He bought them off with a huge amount of money. Yes, Messi had to pay them to relocate to a different location, so that he could be left alone.

The picture below shows an aerial view of Messi’s house and his neighbors. 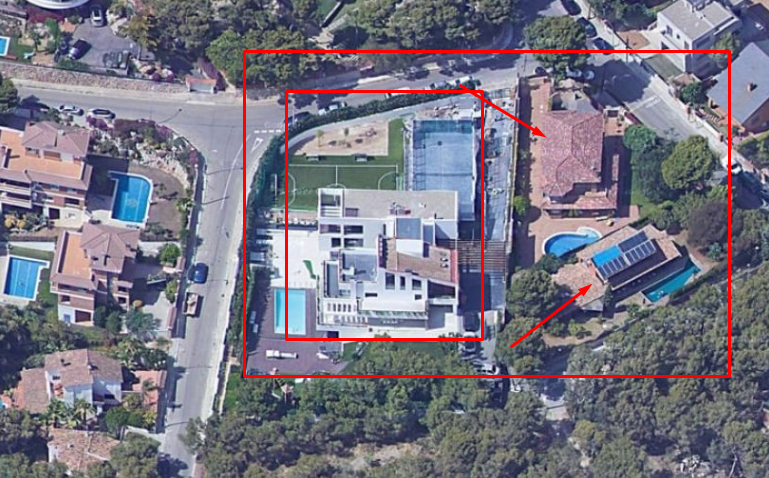 So you see, the popular things that we see flying around the internet are not always true. Hence, it’s not advisable to always believe everything you see on the internet.

That is why its always good to get your facts from a reliable site like awajis.com, so you don’t get misguided.

That’s all on Lionel Messi’s house.

I hope you enjoyed reading this article on Lionel Messi’s house? So then, kindly share this article.

2021 List of Ilese School of Health Courses and Admission Requirements

College of Education Akwanga 2021 Courses, School Fees, Cut Off Mark and How to Apply

2021 List of Less Competitive Courses to Study in Nigeria Universities