What You Need To Know About Ugu Leaf

Ugu leaf, as commonly called by Nigerians, is a tropical vine that is grown in West Africa. Below are what you need to know about Ugu (pumpkin) leaf. 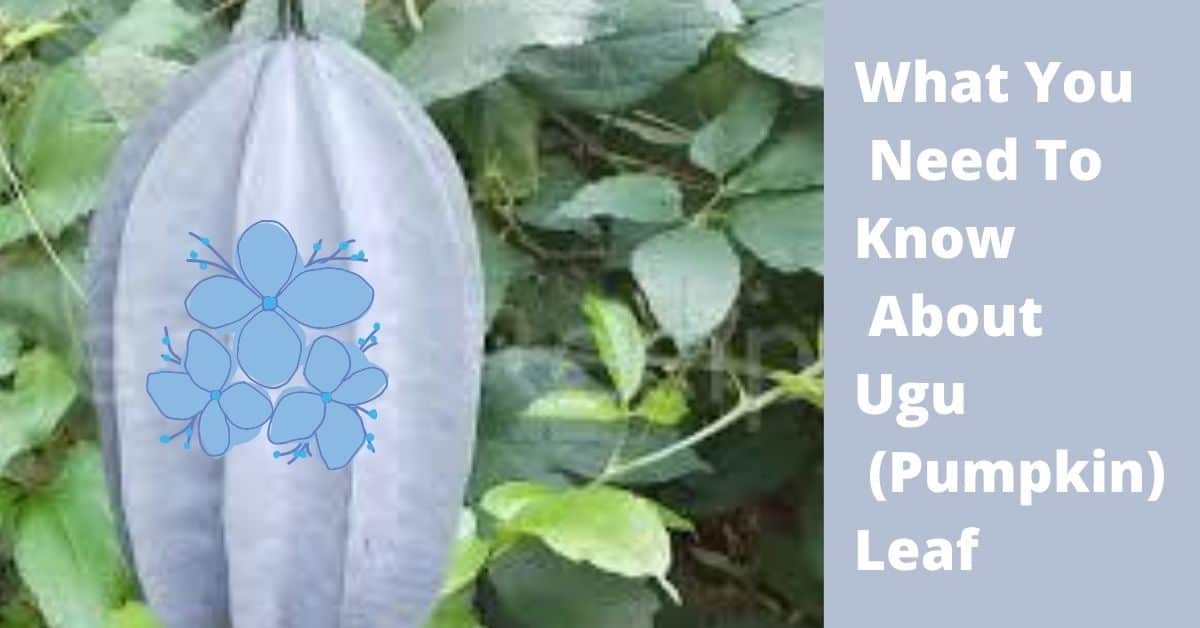 Apart from ‘ugu’ which is the Igbo name for the leaf, other common names include; fluted gourd, fluted pumpkin, ikong-ubong (in Efik ), Ejirin (in Yoruba) and nkong-ubong( in Ibibio).

You were wondering where the name Telfairia occidentalis came about? Below are what you need to know about Ugu (Pumpkin) leaf scientific classification.

This data holds for 100g of picked fluted pumpkin leaves;

These seeds are highly edible and, contain high protein and fat. Therefore, it can contribute to a well-balanced diet. It is a drought-tolerant, dioecious perennial often grown trellised.

Just like other things to be cultivated requires carefulness and patience, T. occidentalis is not left behind.

It is grown vertically on a trestle-like structure but, can be allowed to spread flat on a field. These methods suppress weeds, especially when it is intercropped with a tall, upright plant such as maize.

The growing period falls between April and May although it can be planted towards the end of the year, this period is called the late planting period.

Regardless of when seeds are cultivated, the first leaves and shoots can be harvested after one month and can be collected every 2–4 weeks after that.

Subsequently, the seeds are extracted from the big guard and washed then dried; depending on the planter’s choice, a portion of them could be consumed, while the other is stored for the following planting season.

If the gourd is to be stored whole as it is best done to stand a long time, it must be kept in less dense environs. This helps ensure that the seeds inside the gourd do not get rotten before it can be planted as the seed is highly perishable.

When storing the leaves, one should be extremely careful as it does NOT take so much time before the leaves lose its nutritional value and water content. To reduce these losses,  harvested leaves can be stored in sealed, polyethene bags, and at lower temperatures (2-4 °C).

Below are what your body systems stand to gain when you consume pumpkin leaves.

Convulsion as a disorder can be explained as a sudden, violent, irregular movement of the body, caused by involuntary contraction of muscles and associated especially with brain disorders such as epilepsy, the presence of certain toxins or other agents in the blood, or fever in children.

The young leaves are sliced and mixed with coconut water and salt and are stored in a bottle whenever there’s a need for it.

Studies have shown that pumpkin leaves can be very vital when it comes to treating infertility issues.

The antioxidants properties, which include oleic acid, vitamin A, alkaloids, tannins, and linoleic acid, have been shown to help boost the functionality of the testicles for an increased sperm count.

Known to help reduce the sugar level in the blood, the hypoglycemic effect of pumpkin leaves help keep diabetes under control.

Studies have also shown that the aqueous leaf extract of pumpkin leaves acts as anti-diabetic properties which help to reduce and regulate the glucose level of diabetic patients.

And this is linked to the presence of ethyl acetate and polysaccharides content in the leaves, which are anti-diabetic properties.

Gradually becoming one of the significant causes of death around the world, cancer is now a household name when it comes to sicknesses.

And unlike before, when it was rare to find someone suffering from cancer, it has become more like an airborne disease nowadays.

Be that as it may, the presence of antioxidant and anti-inflammatory properties in fluted pumpkin leaves help fight against the dreaded illness.

The immune system comprises the organs and processes of the body that provide resistance to infection and toxins. And these organs include the thymus, bone marrow, and lymph nodes.

However, owing to the rich content of vitamins and minerals contained in it, pumpkin leaves are a high booster of the immune system.

Pumpkin leaves are filled with copper, which is an effective antioxidant, which helps strengthen cellular membranes. In pumpkin leaf, is an antioxidant enzyme known as super oxidant dismutase, a powerful chemical that supports the body’s fight against free radicals. Free radicals do a lot of damage to the body’s cell, which in the long-term cause age spots, cancers, wrinkles and muscular atrophy. Consumption of pumpkin leaves helps your body to feel and look young.

Phosphorus, which is found in pumpkin leaf, is essential for maintaining bone health. It also plays a prominent role in improving the appearance of teeth and gum. From the enamel to the jaw bone, phosphorous helps keep these tissues and bone in good shape.

Pumpkin leaf is fibre-rich. This means it improves the excretion and stooling, making the passage of faecal matters seamless and easier. A lack of fibre causes constipation, which causes difficulty and strain in passing stool. Regular constipation may lead to complications like piles, intestinal diverticulosis and anaemia.

Most women have a condition called premenstrual syndrome (PMS), Which means they may suffer from a lot of physical and emotional disturbances after ovulation and before menstruation. A lot of women are depressed, in tears, encounter mood swing and very irritable before the onset of their menstrual period. Manganese is a nutrient, found in pumpkin leaves, that can alleviate premenstrual syndrome.

Rheumatoid Arthritis can be triggered due to low levels of vitamin B6. Studies have found that people living with Rheumatoid Arthritis need lots of Vitamin B6, due to inflammation and pains felt in the muscles and joint. Pumpkin leaf is rich in Vitamin B6 and can alleviate and control aching conditions in adults.

9. Useful in the treatment of high cholesterol levels in the blood.

10. Lower cholesterol: The study has shown that the leaves contain a hypolipidemic effect and may be a useful therapy in hypercholesterolemia.

13. The seeds are highly nutritious as the seeds are rich in unsaturated fatty acids and can be eaten after boiling or roasting.

14. The leaves have antibacterial effects.

15. Rich in iron and can be used to cure anaemia and chronic fatigue.

16. Ugu juice is excellent in boosting a weakening immune system.

19. The Vitamin A content in Ugu can be employed as a part treatment protocol for the treatment and management of sexual and urinary tract infections, respiratory infections, vision problems, skin diseases, etc.

20. Diabetic patients should take note that Ugu seeds even contain more blood-glucose-lowering action than the leaves.

I hope this article on; What You Need To Know About Ugu (Pumpkin) Leaf has given you enough reason to consume more Ugu leave.

I Studied Education – Must I Be A Teacher?

✔✔ Ask Awajis
‘What’s the time?’ you may ask someone and the person may certainly reply with an ‘AM or PM’…
✔✔ Ask Awajis
Larry H. Parker is a legal expert dedicated to defending the rights of persons wounded in car crashes,…
✔✔ Ask Awajis
What Does JFC Stand For?… Would you like to know what JFC means, when, and how it is…
✔✔ Ask Awajis
Characteristics of an Eagle: Eagle from time immemorial has been a paradigm that people use to explain excellence.…
✔✔ Ask Awajis
welcome, here is our post on The truth about the ‘following me’ Facebook hoax. Continue reading it below:…
✔✔ Ask Awajis
Students who desire to pursue a degree in hospitality or tourism have many prospects. Of course, the first…