Subnautica Below Zero Map transports you to an incredible alien planet where you can explore a mind-boggling, freezing underwater world. 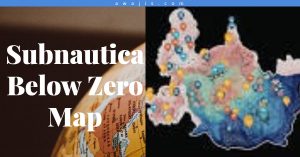 The Subnautica Below Zero map is a sprawling icy wilderness. 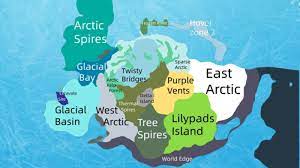 The coordinates of the Subnautica Below Zero Map are presented below:

The Subnautica: Below Zero is a delightful exploration and survival game where players can explore vast land and water areas.

Subnautica: Below Zero is a game made by Unknown Worlds Entertainment that acts as a stand-alone expansion to the story of Subnautica.

The story takes place within Sector Zero, an arctic zone of Planet 4546B.

It is the sequel to the 2014 game Subnautica.

Introduced in early access via Steam and the Epic Games Store in January 2019, Subnautica: Below Zero was released for Microsoft Windows, macOS, PlayStation 4, PlayStation 5, Xbox One, Xbox Series X/S, and Nintendo Switch on May 14, 2021.

Bandai Namco Entertainment publishes the physical versions of the game.

It features a new protagonist, Robin Ayou, rather than Ryley Robinson. It takes place in a different location, two years after Ryley Robinson escapes from the planet.

Subnautica: Below Zero has a ton of things to do and see. The world’s openness is astounding. Players can travel above and below water, into caves and structures, and more.

The map is enormous. There is no other way to put it. It can be difficult to locate a specific area.

A map and a list of all the biomes should be enough to lift an explorer’s burden.

The Subnautica Below Zero Map could be areas for growing and farming, story progression, or simply really cool places to explore.

Subnautica Below Zero currently has 25 Biomes. Some are sub-Biomes, but they have their own names.

The above water biomes are:

At above water, players will find the listed Biomes.

Arctic Spires plays host to the Greenhouse. Delta Island is where Delta Station and the Communications Tower reside.

The Glacial Basin is where Subnautica: Below Zero players will find the Phi Robotics Center.

Glacial Bay is where players will locate the Energy Generator about 70 meters above sea level.

The following are the underwater biomes:

Most Subnautica: Below Zero exploration will occur in the underwater Biomes. The crashed Mercury II vessel can be found in Lilypad Islands and Purple Vents.

The Satellite and Marguerit’s Greenhouse can be found in the Arctic. The World Edge Biome is 8192 meters deep. If they reach that depth, they will simply be teleported back.

The underwater caves are:

The underwater caves in Subnautica: Below Zero are where players will find many resources. They are also some of the most dangerous locations in the game. They are dark and can be quite the maze for inexperienced travelers.

System Requirements for the Game 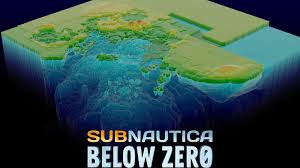 How to Play Subnautica: Below Zero

The player must explore an alien environment and survive while completing plot-related objectives.

Each has its recipe, and some ingredients are only found in the game’s depths.

Each piece of craftable equipment has its recipe, and the player starts out knowing only a few.

Scanning technology and databoxes in the game world reveal new recipes. New crafting recipes are another reason to explore.

Deep-water access is limited by oxygen. The player can only hold her breath for 45 seconds at the start of the game, and she loses oxygen faster below 100 m.

The player must create high-capacity oxygen tanks and vehicles to stay underwater longer. Vehicles provide unlimited oxygen to the player, but you must upgrade them to withstand high water pressure.

The game is mostly underwater, but there are land areas in the north.

Body heat is now a part of the game when walking on land, alongside other familiar mechanics like oxygen, hunger, and thirst.

The player will lose body heat and die of cold, but they can regain it by jumping into water or standing near a heat source. It works as an oxygen gauge underwater.

Upon beginning a new game, players must select a difficulty mode from the following four:

The player must manage health, hunger, thirst, oxygen and temperature. Upon death, they respawn, but certain items are lost from their inventory. This mode is the “standard” game mode.

It is just like survival mode, but with hunger and thirst disabled.

The Hardcore Mode is just like the survival mode. But if the player dies, the player will not respawn, and their save file is deleted.

Health, hunger, thirst, oxygen and temperature are disabled, all the crafting blueprints are available at the start, and no resources are required to craft.

The submersibles, a Seaglide, mobile vehicle bay, knife, flashlight, habitat builder, scanner and a propulsion cannon are provided. They do not need an energy source and cannot be damaged (unless the player damages them intentionally).

That’s all for the Subnautica Below Zero Map.

Check awajis.com for other exciting and educative articles.

bblog
Are you a lover of animals and pets? Do you love snakes? Here are beautiful images of snakes…
bblog
Latest guide on linking your bank verification number (BVN) to your sterling bank account without stress! How to…
bblog
Welcome to maritime academy Oron Post UTME updates page. Right here you’ll see everything you need to know…
bblog
Overseas Workers Welfare Administration, OWWA Scholarship Application Portal. Apply for the OWWA Scholarship Program here. Application for the…
bblog
Even though Nigeria is one of the countries with the highest unemployment rate recorded, there are over one…
EEntertainment
O2TvSeries is the only site to free download your all favorite English tv series and season in compatible…