How to Apply for NYSC Relocation – Most prospective corp members will always search for ways to work out their NYSC posting to a preferable state of their choice.

A few will be successful while others may not have enough money to carry it out. These latter set of people thus leave their hope into the hands of fate.

While hope on fate could bring unexpected happy outcomes sometimes, some others find that they do not fancy their state of deployment.

In this instance, they begin to brainstorm ways for redeployment. Redeployment can thus be referred to as process involved in transferring a corp member from the state of deployment to another a more presumed comfortable state.

Redeployment is a process that should be initiated by the corp member. Redeployment can only be started in the camp after the swearing-in ceremony which can only be implemented only after the camp. There are however laid down conditions/factors that make the redeployment possible.

It is very vital that you get to know these procedures in advance. There is a lot of stress involved in this process and failure to know in advance can make it even more difficult a process.

If you are married, NYSC has made it possible for you to apply for redeployment. This privilege is only open to female corp members.

The corp members redeploying on this basis are expected to redeploy to their husbands’ state of residence. This restriction to only female corp members might be based on the fact that women would mostly be needed at home than their husbands. (Well I don’t know if the moral of that claim is just). That’s the rule anyways.

Those redeploying on the basis of marital grounds would be expected to supply or attach the following:

You can also be considered for redeployment on medical grounds. The medical report coming from an authentic hospital must come with strong medical conditions that would make it difficult for you to stay away from your family or you state of treatment.

Medical reports can only be accepted from recognized hospitals such as institution’s medical Centre or a recognized General Hospitals, Military/Police Hospital, Federal Medical Centre’s reports. (See Sample Letter Below)

Your report would undergo scrutiny. The process has become stricter than before. Most of this report are said to be sent to the secretariat in the state where the report was collected for them to verify the hospital and the claims in the report.

With the advance of the internet, it is now possible to apply for redeployment on the nysc official portal making the scrutiny process stronger. #nysc relocation

The security concerns in our country are well known.

With the advent of Boko Haram in most northern states of Nigeria and the brutal religious killing in most of these areas, the life and security of most of these corp members are at risk. No parents would feel at home to leave his or her ward in these danger zones. The NYSC administration has also made it possible for these ones posted to these places to apply for redeployment.

In recent development, the three weeks orientation camp of corp members posted to these places are usually carried out in other peaceful states. Some of the northern states that are considered to be security risk areas include Borno, Adamawa, Yobe, Gombe and others.

For those unfortunate to be sent to these areas they have nothing to panic about. The government is very considerate on the subject.

No one should see this as a failure in the scheme of the government’s reintegration program. If a part of the country is in security risk should not stop the unification of the other parts of the country. The NYSC remains a worthy scheme of our government in spite of these challenges. Giving clauses or exception to certain areas, conditions or people does not invalidate the rest of the project.

Note that you can always reapply for redeployment if your initial application is rejected. Even if it is not rejected the redeployment process is opened throughout the service year. Considering redeployment has its own challenges. Some of the major challenges are that your first three months allowance might be delayed in your new state of redeployment, and finding a new place of primary assignment might be quite more difficult or stressing since most good areas must have been filled before your arrival.

I am sure I have given you enough information to guide you and make you confident through your redeployment process. I would be here some other time to continue on articles that will continue to guide you through the year-long national service. Look below you’ll find a box please remember to place a kind comment. Thank you!

The above named corp member is a known asthmatic patient and has been on medication since the diagnosis was made three years ago.

His medical conditions demands that he does not get exposed to dust, cold weather so as to avoid unnecessary acute exacerbation of asthmatic attack

His conditions also demands that he stays closer to his people to be able to procure him medications regularly and to be adequately taken care of by his parents.

I believe that staying closer to his parents will enable him maintain a healthy living.

Here, I will cover the reasons that might make you want to relocate your NYSC posting and how to apply for that relocation (if you decide to)

The National Youth Service Corp, have put in place relocation based on three main factors:-

However, many Corps Members only talk about redeployment if the state of deployment isn’t favourable to them or probably surrounded by life and death threatening situation (Boko haram).

For knowledge sake, the three reasons (criteria) for redeployment has been explained below. 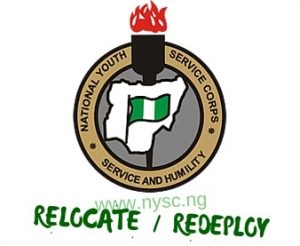 This condition apply to only female corps members who want to move to the state of residence of their husbands.

The application should be addressed to the Director-General through the State Coordinator. If you are applying on marital ground, you are to attach the following:

This is the most abused method. To apply, you will need a medical report from recognized Medical Centre or a recognized General Hospitals, Federal Medical Centres, Military/Police Hospital reports. Note that acclaimed medical case history are subject to further confirmation to establish their authenticity

For now, states affected include: Borno, Adamawa, Gombe, Yobe, and other Northern states in that region.

The security state of some Northern States of Nigeria has been a major concern in the country and the trend of Boko haram is on the high-rise, most Northern states are not safe anymore and such is why news abound on killings and bombings by Boko haram.

Relocation on this condition is usually granted to all Corps Members affected not individually.

How To Apply for NYSC Relocation

For you to be considered for nysc relocation, you must have filled and submitted the relocation form and attach the required documents to it.

This form will be given to any interested corps member that requested for it (that is some days after everyone are through with their registrations).

It will be announced, so you have to be attentive and alert to know when it will be available for collection. Because if you fail to fill the form, then relocation for you is no longer possible.

Depending on the criteria as detailed above, apply through the appropriate authority in your state of deployment and await for approval.

Feel free to drop any questions and contributions using the comment box below.