In this article, we will explore the various navy barracks in Nigeria. They are quite a handful of them across the country. 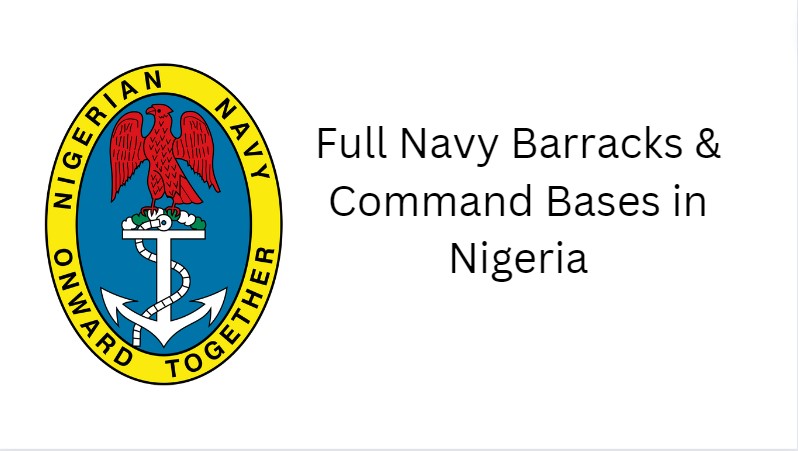 Here are the Navy Barracks in Nigeria:

The Nigerian Navy barrack is generally a network of accommodation facilities erected to shelter naval officials and men across the country. The word “barracks,” which originally meant “soldier’s tent,” was first used in the French and Italian dialects in the seventeenth century. However, in Nigeria today, barracks are often long-term housing complexes used for military housing.

In many Nigerian military units, both non-commissioned officers and senior non-commissioned officers are regularly accommodated in barracks for service or training. Officers are usually in charge of maintaining order in the barracks and among the men. Senior NCOs and officers can rent or be given their own quarters; however, junior enlisted naval officers and occasionally junior NCOs may generally get less room. Junior Naval officers are often in charge of maintaining the barracks’ cleanliness.

The head office of the Western Naval Command can be found in Apapa in Lagos State. It stretches the maritime and seaside areas from the Nigeria/Benin boundary at Longitude 002 degrees 49’ East to Longitude 006 degrees East in Delta State, from the Nigerian shoreline to the boundary of the country’s exclusive trade area.

The following units are among those controlled by the Western Naval Command of the Nigerian Navy in the country:

The Eastern Naval Command is the 2nd operational center of the Nigerian Navy, with its head office located in Calabar, the capital of Cross River State.

The ENC covers the whole marine area from Longitude 006 degrees East in Delta State to the Nigeria/Cameroon boundary at Longitude 008 degrees 30’ East, extending from the Nigerian shoreline to the boundary of the country’s exclusive trade area.

The Nigerian Navy’s 3rd operational command, the Central Naval Command (CNC), was formed in February 2012 and has its head office in Brass, Bayelsa State.

Since it is a new command with no office buildings or spaces on the ground in Brass, a command’s temporary headquarters began operating as an HQ (Annex) CNC at Yenagoa in March 2012 with the 1st stream of officers and ratings.

The autonomous units are those navy departments that need careful administration and high management that should not be duplicated or depicted in the lower hierarchy.

These units assist in maintaining the ships and manpower of the Nigerian Navy, and it takes orders from the Chief of Naval Staff.

✔✔ Ask Awajis
When you purchase an item, you do have expectations about it. If your expectations aren’t satisfied, you’ll be…
✔✔ Ask Awajis
This article is a compilation of the full list of Road Traffic Agencies in Nigeria. These road traffic…
✔✔ Ask Awajis
Halloween, similar to Valentine’s Day and Thanksgiving, is a secular holiday that has no religious overtones. This is…
✔✔ Ask Awajis
The correct interpretation of God’s pure Word has been greatly tainted by conventional Christianity and its superficial emphasis…
✔✔ Ask Awajis
Top 12 Best Fashion Design Software Latest Update. As someone who is in a fashion design school, or…
✔✔ Ask Awajis
Airtel has unveiled the ‘Airtel unlimited ultra plan’ designed for modems, routers and mifi to offer 4G speedy…