The Joint Admission and Matriculation Board (JAMB) has said that the results of the 2018 Unified Tertiary Matriculation Examination (UTME) will not be released immediately. 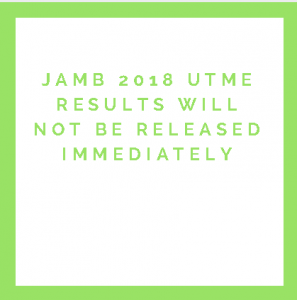 This was made known by the Registrar, Prof, Oloyede. According to him, the reason there will be delay in release of results is to review the activities of the candidates and to minimize the number of cancellations.

The JAMB boss mentioned that last year the board proved a point that there is nothing extra ordinary in releasing results immediately. However, some results were later cancelled when the board found out what happened in some centres through the CCTV Cameras.

So if we have to take two or three days to look at the conduct of the candidates before releasing the 2018 result so as to minimize cancellation, then we will do so.” He said

Mr. Oloyede said no computer-based centre is allowed to collect any cash from the candidates for the main exam adding that the board will release the agreed sum of N600 per candidate due to the centres to them.

The registrar urged candidates to adhere strictly to the date and time allocated to them for examination. He said any candidate who fails to turn up on schedule for his or her examination automatically misses the examination.

The examination is scheduled to begin today.