Porcupine is large rodent coated with sharp and pointy spines, or quills, that helps to protect them from predators. 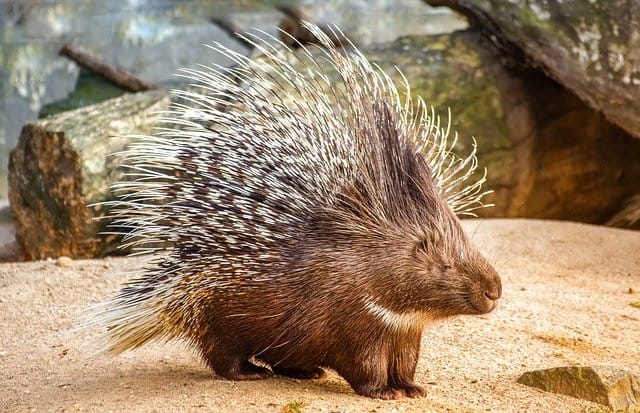 A lot of top naturalists would hold the notion that porcupines can’t shoot their quills against the belief of a lot of people who have come in close contact with the said rodent.

They have dismissed the idea of porcupines shooting their quills a long time ago, terming it as delusional and mere assumption of the naïve few.

If you are asking if Porcupines shoot their quills, this article will answer that question.

He was trailing a pack of timber wolves in hopes of catching them asleep after having a fresh kill.

He saw and chased down a porcupine to a corner, poked the porcupine with a long stick in hopes that the creature would reveal to him how quill shooting was done.

This could be done by some mysterious body mechanism he wondered as he observed the reaction of the porcupine.

The most confusing thing about this researcher’s quest was that he often finds quills stuck on his clothes and slightly poking his skin on his way home as if to say the porcupine had shot hem while he was distracted.

Years later, he had almost erased that entire experience when a porcupine took his mind back to that previous experience.

If you have seen a porcupine up close, you will realize that on the back and sides of the rodent are multitudes of quills that slide backwards when he is relaxed and these quills are hidden beneath a mop of hair.

On the upper side of the rodent’s tail is hairless and quite flat, fully covered with shorter quills well arranged, pointing forward in a crossed pattern.

The quills on the body and tail of a porcupine are very lightly attached to their skin and this causes them to easily get stuck to any object or thing that comes in contact with them.

Two major factors about the porcupine is that the armor is often renewed just as they go off, new ones grow back, and that as the fresh quills come up, the old ones get weak and fall off.

The evidence that porcupines shed its quills can be found in places where porcupines gather.

During the period of the new quill coming up, any sudden flip of the porcupine’s tail would cause some of the quills flying around and this is proof that porcupines actually shoot their quills.

This quill shooting by the porcupine occurs under certain conditions which is in scenarios when the porcupine feels threatened or under attack.

This is because whenever the porcupine shoots its quills, it is frightened and usually does that with its back turned and its eyes facing the ground.

This makes it difficult for the porcupine to actually aim its quills at any target due to the fact that it just flings its tail aimlessly into the air with no sense of specific aim. \

This doesn’t take away the fact that the quills from porcupines are painful and dangerous when they come in contact with your skin.

This is so because the quills are covered in dirt and unlike humans, porcupines don’t have a daily bath plan so they possibly get their bodies in contact with several unhealthy particles that get stuck on their quills which when shot at a human can cause severe health consequences.

Since it is proven that porcupines actually shoot their quills involuntarily and aimlessly, it is advisable to wear thick gloves or protective gear whenever you intend holding or meddling with this unique creature.

This Might Also Interest You: Fattest Man In The World

My only suggestion to one who would monkey with a porcupine’s tail is this: wear tough gloves on your hands and glasses to protect your eyes.

Behaviour and Habitat of porcupines

The species of porcupine seen in most forests in Northern and Southern America are excellent climbers and enjoy staying on trees. A lot of them have a body part called prehensile tails that help them to climb better. The North  American Porcupine is a native of the United States and Canada. It is the biggest porcupine species. The North American porcupine is reputed to have more than 25,000 quills. It is a wood eater and has long front teeth to help eat it. The North American Porcupine feed on stems and natural bark. It can even feast on paddles, leaves, fruits and buds.

Other species of porcupine are native to Europe, Africa and Asia continents. This means that porcupines can live in desert, forest and grassy areas.

Female porcupines birth up to one and four porcupettes. This number varies according to species. Porcupettes are born with soft quills, which becomes hard after a few days. Porcupettes begin to live in the wild alone after sixty to sixty-five days after birth.

Are porcupines dangerous to humans?

The only time a porcupine attacks a human is when it senses danger.

When it comes to humans, they’re terrified and treat them as if they were predators. You or your pets will not be bitten by a porcupine.

Is a porcupine a deadly creature?

When threatened, the porcupine will strike, but it is not normally violent.

Porcupines will clatter their jaws and emit a pungent stench to ward off predators if they feel threatened. The porcupine will turn away from the threat, flare its quills, and whip with its tail if the threat persists.

How poisonous are porcupines?

A quilled animal might die from trauma in extreme and serious cases. Porcupines aren’t venomous, but their quills are extremely sharp.

If your dog or cat gets quilled, you must take it to the vet right away. If an animal receives prompt medical care, death as a result of getting quilled is extremely rare.

What is the average lifespan of a pet porcupine?

They begin eating solid food after two weeks, but nurse for another four to five months. A wild porcupine’s usual lifespan is four to six years, although pet porcupines have been recorded to survive for up to ten years.