Would you love to know what it looks like to serve as an NYSC corper in Kwara state? Read and discover about the people, their weather, the orientation camp, the local government areas and their PPA’s. 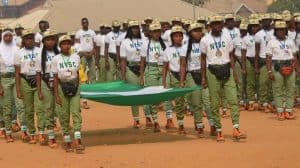 Kwara state, is somewhere located at the verge between the northern and southern part of Nigeria. There seem to be a merge of two major tribes Yoruba and Fulani, but a Fulani dominated influence with the prominence of more Muslims in the state and more cattle rearer’s. Other major tribes there are Nupe and the Baruba tribes.

Structure and Building: As of present the camp is of a low standard. It is covered with clayey kind of sand and coarse stone that can really turn messy during the rainy season.

Rest Rooms: The toilets are mostly pit latrines that serve as the same room for bathing. It can really be irritating to use those rest rooms. Most tend to bath outside at the wee hours of the morning or late into the night.

Recently, the last orientation camp housed a new set of mobile toilets commissioned in the camp. This has helped to relieve the lack of toilets in most hostels.

Feeding: Last year, when a woman was the Camp Director the food served was generally manageable. Some meals like chicken, rice, yam, tea were even rushed like treasure. Disappointingly with a man as the new director of the camp the food served has been reported to be too bad. Many who were in the camp this session complained bitterly.

Discipline: Unlike last year, this session of the orientation camp was kind of lousy, poorly organized, and a poor disciplinary routine by the soldiers. Corp members could be seen in mammy market or roaming around during lectures or program sessions. | awajis.com

Weather: for the batch C’s that usually falls during the tail end of the year say November till January the weather can really be terribly cold. My dear, you will need like four blankets to properly cover yourself in that kind of cold at the night. It is really nice chilling in the camp area.

For the batch B’s that usually falls around May – July or so the weather is a bit raining. This usually brings a lot of unbearable mosquitoes and with the broken windows and poor housing if you do not want to be a dinner feast for the mosquitoes you better come with your personal mosquito net.

For the batch A’s who might fall around February – April the weather is really sunny. If Kwara state is your first experience of a hot weather state then it could really be unbelievably harsh for you. For those who have been further north of the country, they claim there is no sun in Kwara state, but the sun in Kwara state is damn hot for me “whalahi”.

“If this not hot enough I can only imagine the upper north must be the real hell that Christians talk about.

This is the city itself. It is not that big as compared to all the other local government areas.

It is developed with rich roads, standard and impressive buildings, lots of estates, and lots of shopping centers and entertainment zones.

It can be fun to be here in many ways. Most of the students are intelligent and can speak good English which is more than we can say for the other rural local government areas where the kids hardly communicate in English.

The housing is actually five times the price of the house rent of the rural or suburban areas. There is an issue of water though. You have to queue most times to get water and most of which has to be paid for.

Generally, like in all areas of Kwara state, the people tend to charge corp members more when they want to buy something. In the city area, they are friendly anyway, well that is to some extent though.

Generally, the place is not that developed. Mud houses with straw and leaves can be seen across the stretch of the villages. Large acres of empty, scorched, clayey land can be seen in many of the areas.

It is the location of the orientation camp. It is rare to see a school that pays corp members in the area.

Well, most of the corp members are sometimes given free lands that they can cultivate and raise farm produce.

Most corpers are lodged in corper lodge. They can easily save money from their foodstuffs that the villages give them. The community is more friendly in providing assistance to the corp members in nearly everything from washing clothes, to fetching water, giving them a ride, and things like that.

No pay by the local government. It is actually the home to the present governor of the state. As such it is a more developed town with more road networks compared to the other local government around them.

You can find one toilet out of 10 houses. However, there is self contain rising here and there due to the influx of corp members or strangers so one can find a conducive place to stay. Houses here are usually cheap.

Only about one-eighth of the student in a class can be manageably brilliant. It is hard to see any of the students speaking English. There are always in their Yoruba language.

The people are stingy and always begging for money or something from corpers. Most schools do not pay either. Those who pay offer nothing more than N3,000.

If you need a simple and relaxing place to stay and avoid the clutter and noise of city life you can love to serve in the Share area in Ifelodun I.

Ifelodun II is an extension of Ifelodun I and much like the former. The only difference is that they are more of undeveloped buildings or structures in the Ifelodun II than they are developed areas. That is to say, there are more village areas than suburban areas.

Housing is cheap, most of the houses don’t have toilets so there are more bushes for you to do your toilet business. Payment of extra allowance by the PPA’s is also rare.

Moro and oyun are close local governments to each other and both are far closer to the city, Ilorin. It has developed areas or buildings, and also poor, old structure areas too. Moro and oyun is a central part or important area for Kwara government (so I heard). It houses two big tertiary institutions, Kwasu and Kwara poly.

The people of patigi are very friendly people, especially to corp members. They care and take priority in protecting them. The people speak the Nupe language. They can be aggressive sometimes with their neighboring villages or town when it comes to land issues.

They live very close to each other. Houses are here are quite modern and the state of the community is quite developed. It is a lively environment with centers for hanging out and having pleasure and fun.

It is not that a boring place for corp members to stay. There are lodges for corpers. Corpers can find a very cheap house if the situation demands them to live away from the corpers lodge.

The community is ready to help them, they can provide foodstuffs to them; assist them in fetching water and other menial activities. Most of the people are not educated and it can be pretty hard to teach children in their schools. Some of the schools look more like an adult school where you see matured married and unmarried persons.

Some PPA’s pay little stipends to the corp members monthly while some don’t.

The place is quite local though. Corp member’s in this area have to experience the rural life and their lifestyle here.

There is however corper lodges that have comfortable rooms or even rooms for each corper. The corp members get a lot of assistance and help from the local people. The little kids can be helpful in washing their cloth, and the community also assists in giving them food and foodstuff.

The place is actually far from the city, Illorin like a four to five hours journey. So people sent to this area hardly come down to the city in their entire stay.

Generally, Corpers don’t really like the place. One reason is that the state doesn’t pay corpers. The PPA’s don’t even care to pay anything extra except on rare case or PPA’s.

The opportunities here are quite rare. The people are generally poor people. In the city area though they love business and business seems to be thriving.

There is a little class distinction among them. They are quite respectful especially among themselves.

Talking about their girls they are always covering their head to their leg so you don’t even know if they are sexy or fine looking or not.

That is as much as there is to know about serving in kwara state. If you have forgotten, this is www.awajiscom/nysc serving you with all you need to know about NYSC and beyond. Thank you for being here.