The Internet is the global system of interconnected computer networks that use the Internet protocol suite (TCP/IP) to link devices worldwide.

The foundations for the internet were set up by the US Department of Defense in the 1960s. This involved a process of connecting computers in order to transfer data more quickly. A process that is still ongoing to this day.

Most people believe that the internet is a thing that just exist in the air. No doubt, the internet may indeed seem like an endless stream of cyberspace, but it takes a lot of real space on the earth to keep it running. Lets take a look at some of the places that you can physically locate the internet. 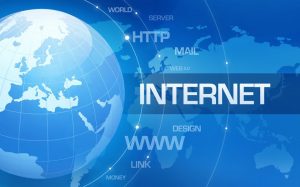 Rather than travel through the air, as you might think, the internet travels actually across the globe through a series of underground cables, many of which stretch across the world’s oceans.

The cables were installed by boats, known as cable-layers, and were carefully mapped out to avoid hitting sunken ships or coral reefs.

Undersea cables connecting the world may seem like a new thing, but in fact they have been down there since the 1860s

Apollo Submarine Cable Systems, runs the most advanced trans-Atlantic cable system, connecting the US to the UK and Europe.

Pacific Crossing, runs the main trans-pacific cable system, connecting the US to Asia.

PIPE Networks, runs the main cable network connecting Australia to Asia and the US.

Another place where you can physically locate the internet is 60 Hudson Street.

60 Hudson Street, formerly known as the Western Union Building, is a telecommunications building spanning the entire block between Hudson Street, Thomas Street, Worth Street, and West Broadway in the TriBeCa neighborhood of Manhattan, New York City.

The building currently serves as a major data hub center, where dozens of telecommunications companies route internet traffic and exchange information in a “meet-me-room” through fiber optic lines. 60 Hudson Street, also houses more than 400 cables, including the ones that connect North America and Europe.

NSA Data Center is home to massive servers which collect and store data from emails, internet searches, cell phone calls, Amazon purchases, and more. It’s where the NSA stockpiles communication information from all across the world.

Some of the largest physical manifestations of the internet exist in cloud campuses. Tech giants like Apple, Google, Facebook, Amazon, and Microsoft have invested in these sprawling data centers in order to build server capacity and electricity to power their networks.

Must see Pictures OF Nicki Minaj Before Plastic Surgery

How To Ask A Girl To Your Girlfriend

Funniest Nigerian Memes On The Internet

What Does AM And PM Stand For