Do Muslims Use Toilet Paper? – A lot of questions have been asked lately if Muslims use toilet tissue due to the fact that most of them are always seen going to the toilet with a small keg of water in their hand.

You must know that Muslims have their toilet etiquette, which they adhere to. The Islamic toilet etiquette fore mentioned is called the Qadaa al-Haajah which contains rules that predate the invention of toilet paper. 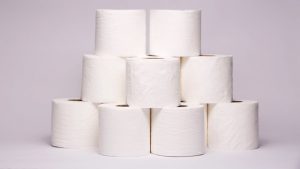 “While it is forbidden to drink substances containing alcohol that was produced for cleaning purposes, it is acceptable to use them for cleaning. Therefore the places that were cleaned with such substances need not be washed before performing a prayer

According to the strict code, Muslims must squat or sit – but not stand – while relieving themselves. They also must remain silent while on the toilet and leave with the right foot while saying a prayer.

So, for the question; do Muslims use Toilet tissue? the answer is embedded in these reports by Muslims.

1. He may purify himself using stones. Doing istijmaar or removing impurities with stones is sufficient. This is indicated by the words and actions of the Messenger (peace and blessings of Allaah be upon him).

With regard to his words, Salmaan (may Allaah be pleased with him) said: “The Messenger of Allaah (peace and blessings of Allaah be upon him) forbade us to use less than three stones for the purpose of istijmaar.”

With regard to his actions, Ibn Mas’ood (may Allaah be pleased with him) said: “The Prophet (peace and blessings of Allaah be upon him) went out to answer the call of nature and asked me to bring him three stones. I found two stones and searched for a third but could not find one.

So I took a piece of dried dung and brought it to him. He took the two stones and threw away the dung and said, ‘This is a filthy thing.’”

The hadeeth of Abu Hurayrah, which states that he gathered some stones for the Prophet (peace and blessings of Allaah be upon him) and brought them to him in his garment, put them down next to him then went away (narrated by al-Bukhaari, 154) indicates that istijmaar (using stones to cleanse oneself after relieving oneself) is permissible.

3. He may purify himself with water, which is permissible. The evidence for that is the hadeeth of Anas (may Allaah be pleased with him) who said: “The Prophet (peace and blessings of Allaah be upon him) used to relieve himself, then another boy and I would bring a vessel of water and a short spear [to use as a sutrah for the prayer he was going to do after doing wudoo’] and he would cleanse himself with the water.”