Hi there, if you are looking for Yoruba hairstyles for women and children, you have found yourself a solution already because you are in the right place. 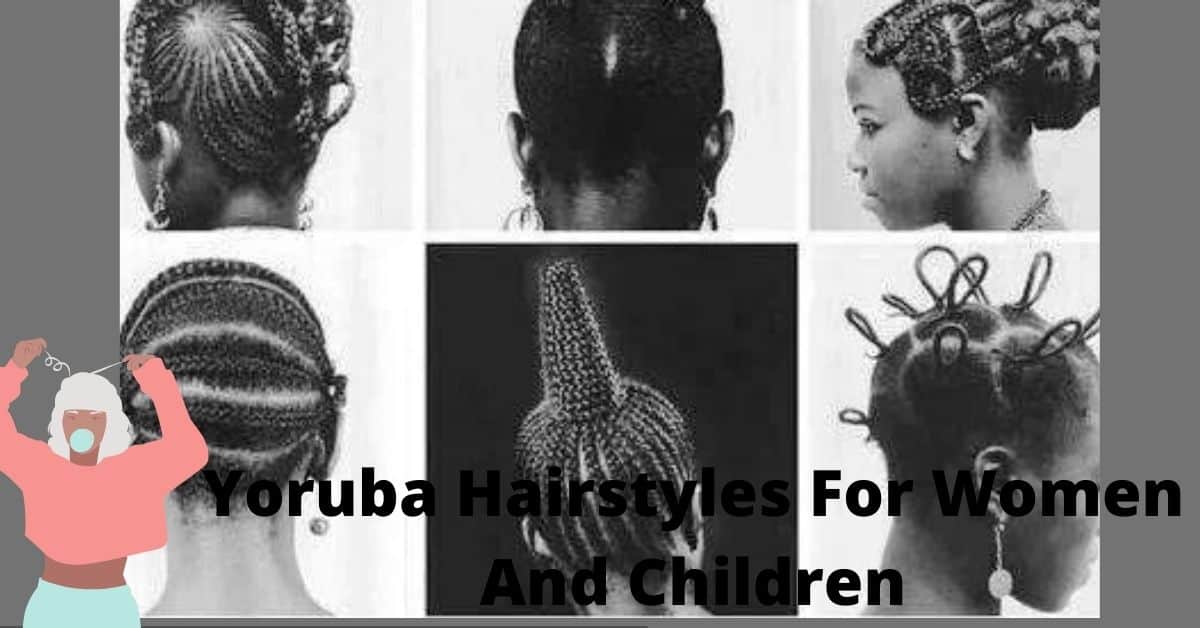 The Yoruba people are one of the three major ethnic groups in Nigeria. They are predominantly scholars, farmers, and traders.

Yoruba which is more correctly pronounced as ‘Yaraba’ is the usual Hausa name for Oyo people. In other words, it was initially being referenced to the Oyo Empire.

Bishop Samuel Ajayi Crowther who was the first Anglican bishop in Nigeria, was an Oyo Yoruba, so, he compiled the first-ever Yoruba dictionary and also introduced a standard for Yoruba orthography.

Just as Yoruba is an independent ethnic group on its own, it has its heritage and cultures that are quite different from other ethnic groups in Nigeria.

Their cuisines, attires, and even hairstyles are peculiar. One of the peculiar traits in this ethnic group is the Yoruba hairstyles for women and children.

Yoruba women are very creative in terms of their physical appearances which includes their fashion and hair. Their history and folklore influence Their traditional and even modern designs (which are generally grouped by the styling method).

There are two basic methods for hairstyles among Yoruba women. There are (Irun Didi) which is the hand plaited style with nothing attached and (Irun Kiko) which is tied with either thread or braided.

Implements Used for Making Yoruba Hairstyles for Women And Children

These hairstyles vary with other conventional hairstyles, and so, the implements used are equally different. Let us quickly look at them.

#1. SHUKU: (also called Suku, means basket): This is quite simple, and it is one of the most popular in Nigeria. It is a form of braiding in which the hair runs from the forehead to the nape of the neck or forms a rump on top of the head.

#2. KOROBA: (Bucket or pail): The braidings radiate from the centre of the head to all parts, like an upturned bucket or container.

Also, check out this article on Top 14 Major Ethnic Groups in Nigeria.

#3. ORISHABUMNI: This style is achieved when Shuku is blended with Koroba. At a time, it was only the wives of kings that could make shuku but that change over time and anyone can now adorn the style.

#4. PANUMO: Panumo means ‘Keep Shut!’, it starts from two different points, one from the forehead and one from the back. The two meet at the centre of the head, leaving a little hole.

#5. OJOKOPETI:  This means ‘Rain is not beating the ears’. The styling technique of this is in such a way that it starts from one ear and then moves across to the other ear.

#6. EKO BRIDGE: This hairstyle is used to represent a bridge in Lagos (Eko), Nigeria. The hair is divided into 10 or 11 sections.

The thin braids are then twisted to form a bridge-like point above the head. Married women are known to rock this style more as it looks more complicated for younger females.

#7. ARO META: This symbolizes trinity, i.e. three equal things. The hair is woven to form three humps on the head; a hump at the front and two at the back of the head.

#8. ROUNDABOUT: In this type of traditional Yoruba hairstyle, the hair is made to look like a roundabout. Using plastic plaiting threads, the long strands of hair are woven into a circular design like a roundabout.

#9. KOJUSOKO: This hairstyle is made by plaiting the hair with plastic plaiting threads that have all of its long strands directed to the front.

Kojusoko means to ‘face the husband’. The men love it when their when paying obeisance to them, so you have to rock this for your husband.

#10. ADE-OBA: This style is made to look like a crown. ‘Ade-Oba’ literally means ‘King’s crown’. You will love this when seen on a queen. This style signifies royalty.

#11. ONILE GOGORO: This is made as a result of the designs seen in the environment by the Yoruba people. ‘Onile Gogoro’ means ‘a very tall building’. Hence, this style is formed by twisting the hair to form a tall building like a skyscraper.

This means ‘end of the war’. The hairstyle was created to commemorate the end of the Nigerian Civil War.

The natural hair is divided into large sections, and plastic plaiting thread is used to make long, thin braids. The braids are then bent into large arches, connecting the thin tops to the bottom of adjacent braids.

#13. KOLESE: This means ‘Legless’. In this knotting style, each knot originates from the front and runs to the back of the head, not too far from the neck. It is also called ‘all back’ or ‘cornrows’.

#14. IPAKO ELEDE: This means ‘occiput of a pig’ or ‘pig’s nape’. In ipako elede, the styling starts from the back, but everything eventually ends in front. When scaling the braids, the non-linear contours of the head are followed.

There is a main middle model that the Onidiri (hairstylist, weaver, or hairdresser) follows by repeating the units in a fantastic form of fractal geometry. Ònsèsòó is the person on whose head the style is being made.

This will be all on Yoruba hairstyles for women and children, hope this information was helpful.