Below is this year’s WAEC syllabus for West African Traditional Religion. Note that this syllabus is for both Internal and external candidates.

[May not be taken with Christian Religious Studies and Islamic Studies] 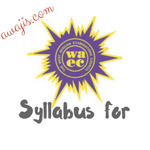 At the end of their study of the subject, the candidates are expected to have

There will be two papers, Papers 1 and 2 both of which will be a composite paper and will be taken at one sitting.

PAPER 1:  Will consist of fifty multiple-choice objective questions all of which must be

answered within 50 minutes for 40 marks.

PAPER 2: Will consist of three sections, Sections A, B and C, each consisting of three    essay-type questions.  The sections shall cover the following areas of the syllabus

Candidates will be required to answer four questions in all, choosing at least

one question from each section, for a total of 60 marks.  The paper will take 2

(i)    Belief in the Supreme Being

(b)      Animism and Ancestral Worship

SECTION B:  THE INDIVIDUAL AND THE COMMUNITY

(a)        The concept/types of religious personalities

(b)       Processes for selecting religious personalities

(a) Concept of Man

(b) Concept of Destiny

(i)  Meaning of witchcraft and magic

(iii)  Role of Witchcraft and Magic

(i)     Description of the stages; Rites of passage:

(ii)     Importance of  Rites of Passage

(i)         Structure of chieftaincy institutions

(b)     Causes and effects of stress situations

(a)        Introduction – meaning/concept of conflict in West African traditional society.

(b)        Circumcision Rites and Reproductive Health

(a)        The impact of foreign religions on (Christianity and Islam) WATR

(b)        The impact of West African Traditional Religion on Christianity and Islam.

(c)        The impact of Science and Technology on West African Traditional Religion.

(d)      West African Traditional Religion and Conservation of the Environment.

(e)        The Impact of Urbanization on West African Traditional Religion.