Bitcoin is one of the most treasured cryptocurrencies at the moment. Currently, one Bitcoin costs thousands of dollars. 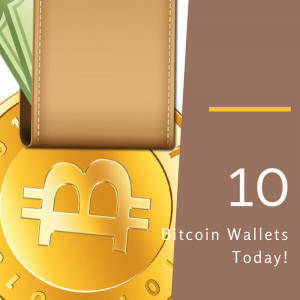 One of the things that make Bitcoin stand out from other cryptocurrencies is that it is a generally accepted crypto worldwide.

Bitcoin, unlike other currencies, is not a physical currency. It is one that is stored online and sometimes on hardware tokens. However, it can be traded for physical cash in local currency.

Without a Bitcoin wallet, you can’t send or receive Bitcoin payments. So the first step in trading Bitcoins is getting a Bitcoin wallet where you can store your Bitcoins.

In this article, I will be showing you how 10 top Bitcoin wallets that is very secure for you to use and store your Bitcoin.

If you intend to utilise bitcoin for daily transactions, such as buying goods and services, or you intend to use bitcoin for trading, then having a bitcoin wallet is a necessity in 2021. You only have to download a wallet app on your phone, have a private key, which will allow you to buy stuff with bitcoin from your phone.

Bitcoin wallets are highly simple to use and use a payment verification technology, which allows you to utilise a small subset of blockchain ledgers. Although bitcoin wallet allows ease and simplicity, most of them are security vulnerable. A hacker can gain access to your account when he hacks your mobile device. This is why we compile our list of the top bitcoin wallets that are highly secured and easy to transact this year.

There are four basic types of Bitcoin wallets, they are:

For the purpose of this article, I will concentrate on Online Bitcoin wallets, as this is what you’ll most likely be using to trade Bitcoins.

Below are 10 top Bitcoin wallets to enable you trade Bitcoin securely and effectively.

If you looking for enhanced security for your coins, Armory is a great choice for you.

Armory is a full bitcoin client, it’s system is not hosted on the web hence you have to download the entire system blockchain before you can make use of this wallet.

The fact that you can store all your bitcoins offline, and also maintain multiple encrypted wallets, makes it one of the most secure bitcoin wallet available.

Another bitcoin wallet that is worthy of note is CoinBase. CoinBase has investments that total up to a mind-boggling $106 million.

Coinbase has a unique vault feature that improves the system’s security. Security features such as delayed withdrawals and multi-signature technology all make CoinBase a great and highly secure Bitcoin wallet.

Blockchain.info is perhaps the fastest-growing bitcoin wallet on this list. I use Blockchain to store my coins and I can absolutely vouch for its security.

Over 2.7 million people currently use www.blockchain.info to store their bitcoins. The Blockchain system is extremely useful and simple to use.

The system also has a 2FA login security, which gives users access to their bitcoin private keys and allows them to have full control over their money. With Blockchain, your coins are safe.

Airbitz is a mobile another secure bitcoin wallet that was designed to be easily accessible for both iOS and Android devices.

We all understand the importance of mobility, so bitcoin wallets that that has robust mobile applications are becoming ever so popular.

Airbitz employs client-side encryption, which means they have zero access to your bitcoins.

Airbitz users enjoy access to their wallet address private seed, this comes in handy in case they need to restore their wallet.

Coinkite is also a great option for a highly secured bitcoin wallet. It features multiple-sign in functionality for increased wallet security, which is something that endears many bitcoin users today.

Coinkite also features the renowned 2FA login security. Every transaction is sent to your phone as notifications.

BitGo has gradually become a respected name in the Bitcoin world. BitGo is considered a leader in blockchain security.

If you intend on carrying out instant transactions using bitcoin, I suggest you try BitGo.

A bitcoin transaction usually needs between 3-6 confirmations, taking about 30-60 minutes, however, with BitGo Instant and its zero-confirmation technology, users can make both secure and fast transactions.

GreenAddress is also a very secure wallet and one I would recommend. It gives you complete control over your money and employs the multi-sign in feature.

GreenAddress software is available on the web, desktop, Android, and iOS. GreenAddress is also compatible with hardware wallets like TREZOR, Ledger Nano, and the HW.1.

Bitcoin Wallet has a user-friendly interface with just the right amount of features, making it the easiest Bitcoin wallet for beginners to learn with. If you’re new to bitcoins, I suggest you start with Bitcoin Wallet.

Mycelium is regarded as one of the safest and most recommended options for secure bitcoin storage on mobile.

Bitcoin Core is the “official” Bitcoin client and wallet, though isn’t used by many due to slow speeds and a lack of features.

Bitcoin Core, however, is a full node, meaning it helps verify and transmit other Bitcoin transactions across the network and stores a copy of the entire blockchain.

This offers better privacy since Core doesn’t have to rely on data from external servers or other peers on the network.

Bitcoin Core routed through Tor is considered one of the best ways to use Bitcoin privately.

How Much Does a Bitcoin Wallet Cost?

Having a Bitcoin wallet does not cost anything if your goal is just to store your Bitcoin in the wallet.

However, if you are engaging in Bitcoin transactions, then you probably might be charged certain fees by the exchange owners that houses your wallet.

Usually, purchasing a Bitcoin wallet might cost you anywhere from $0 to $300 or even more.

How Do You Cash Out Your Bitcoin Wallet?

A lot of persons that wish to begin trading Bitcoin often ask how they can cash their Bitcoin.

That’s all on the 10 Top bitcoin Wallets.

Also See: Dark Web and the Liberalization of Crime In the Internet’s Underworld

How To Recharge GOTV Using Your Mobile Phone (2021 Update)