Protect Your Gadgets with Surge Protector

Surge Protector: If you know what you are looking for, getting a surge protector in the market is not so hard. Getting one should be at the top of the essential things to buy if you are a gadget person. And these days, anybody with a bit of money has several gadgets littering the home.

With a single surge protector, you can protect your expensive gadgets from sudden voltage spikes as well as save energy. 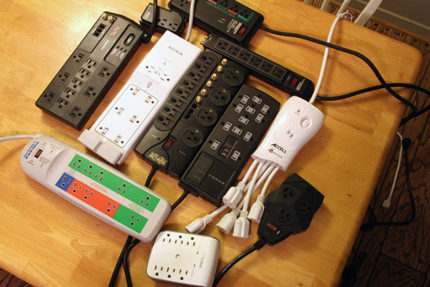 What is a surge protector?

A surge protector is a device that protects your electronics from the harmful effects of unexpected power surges. These increased power surges increase the voltage supply above the recommended level of your gadgets.

For instance, your gadget might be designed to use between 220 and 240 volts of power. An electrical storm (lightning strikes, for example) can cause an increase to astronomical levels.

The result of that is damage to electrical components. In worst-case scenarios, fires flare up from the heat generated, causing damage to other properties in the house.
A good surge protector makes sure that doesn’t happen.

When a surge in power from the grid, a surge protector blocks or diverts the excess voltage to the home’s grounding wire.

Good surge protectors include a component known as metal oxide varistor (MOV). It is the work of the MOV to divert or block the excess power.

Surge protectors are designed in such a way that the incoming current has to pass through the MOV before reaching your gadgets. The MOV, At times, is connected MOV ted to the grounding wire of the home, where the excess voltage can be dissipated harmlessly.

There are two types of surge protectors. Each of them is related to the kind of protection you require.

Where to buy a surge protector

Surge protectors are rather common these days. They can be bought at most online stores or any decent hardware store. And the good part is, you don’t have to spend too much money getting one.

However, prices can differ according to manufacturers and the size. And you have to be careful not to purchase fake ones in a bit to get a bargain.

Remember, your expensive gadgets are worth more than the buck or two you would save buying a cheap, sub-standard surge protector.

The convenience of using a surge protector

Many people are always faced with the problem of having to switch off their gadgets from the power source when they are not in use. Many don’t even bother to unplug their gadgets.

Unplugging each gadget can be very tedious, especially if you have many of them. But you can immediately solve this problem by using a surge protector.

So with just a flick of the switch, you have completely cut off the power supply to all your gadgets from the public electricity grid.

Some advanced models with enhanced features

Surge protectors can go from basic to very sophisticated devices with cutting-edge features.

There are models with outlets that work differently. Some of the outlets in these models have specialized motion sensors that automatically switch off the device when nobody is in the room in the room.

On the same model, too, would be a couple of outlets with no motion sensors. You would have to switch it off manually to cut the power supply to the gadgets plugged into these outlets.

Other advanced models can control the relationship between related gadgets. For instance, your DVD player needs a TV to display video. With these surge protectors, you can program them to kill power to the DVD once the TV is switched off.

You can also program them not to go off no matter what happens to a related gadget.
So as far as surge protectors go, manufacturers are coming up with very exciting features.

The short answer is yes. However, this aspect works for point-of-use surge protectors only.
When gadgets are switched off without unplugging them from the wall socket, they continue using or draining power. Sometimes, bad wiring from the manufacturers contributes to this constant draining of energy.

But even in well-designed gadgets, standby functions like clocks or sensors in these gadgets need energy constantly to function optimally. They get this from drawing energy from the power source, even if the gadget has been powered off.

This energy, popularly known as phantom load or standby power, can be blocked using a surge protector.

This is especially important if you use an inverter as a power source for your gadgets. Using a surge protector allows you to conserve battery energy for only the times you need to use it.

One or two gadgets won’t make much difference, but if you have several gadgets, the cumulative effect can significantly decrease the stored energy in your battery.

A note of caution

Be aware that some surge protectors don’t offer protection against sudden power spikes. So before you invest your money in one, do your due diligence properly.

You can see product reviews from independent sources online and check the manufacturer’s website to see how reputable they are.

Apart from that, though, investing in a surge protector could save you money and stress.

bblog
2go for PC has seen some improvements recently. No download is required to use 2go on a PC.…
bblog
One of the ways the Wannacry ransomware attacks was tackled reminded me of a 1996 movie, Mars Attack,…
bblog
By 2011, Junaid Hussain, whose parents were from Pakistan, was just a 17-year-old kid living in Birmingham, England.…
bblog
Google for Startups Accelerator – Applications are currently invited from suitably qualified candidates for google startups Accelerator programmes…
bblog
Here is the latest enrolling guideline for the Nigerian Defence Academy NDA Short Service Course SSC. The NDA…
bblog
Popularly known as KFC, Kentucky Fried Chicken is a fast-food restaurant that is widely known for its buckets…