José Vítor dos Santos Peseiro is a Portuguese football manager and former player who played as a forward. He is the manager of the Nigerian national team. Wikipedia

Peseiro began his professional career in 1979 with Sport Lisboa e Cartaxo and never played in a league higher than the Segunda Liga. He was born in Coruche, Santarém District. To date, he has played for five different clubs in that league, including Amora FC, Clube Oriental de Lisboa, GD Samora Correia, and S.C.U. Torreense.

After the 1993–1994 season, Peseiro, then 34 years old, played in the fourth division for local club Unio de Santarém before retiring.

Jose Peseiro’s net worth has been assessed to be around $3 million and growing.

With his recent appointment, it is only stated that the addition of the contract and the wages to acquire them would also boost the rate of his net worth as it has been rumored that he is to receive around $45,000 in conversion to N24,750,000. 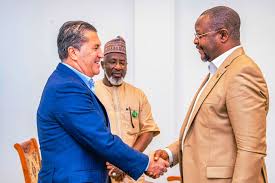 On Wednesday, the Nigeria Football Federation named Jose Peseiro, a Portuguese tactician, as the new head coach of the Super Eagles.

This was announced in a communique released by NFF on Wednesday following its National Executive Council meeting. 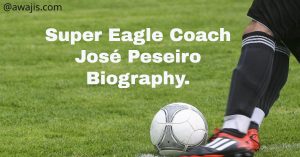 Amaju Pinnick, president of the Nigeria Football Federation (NFF), has already confirmed that he met with Jose Mourinho, coach of Roma, to discuss Mourinho’s potential hiring as manager of the Super Eagles. The Super Eagles fired Franco-German Gernot Rohr 17 days before the appointment of the Portuguese coach.

READ>> Learn All About Becoming a Professional Footballer in Nigeria

Jose Peseiro points out exactly what pleases him about Super Eagles’ record win over Sao Tome and Principe.

Nigeria beat Sierra Leone 2-1 on Friday in Abuja, with goals from Victor Osimhen and Alex Iwobi. The Leone Stars had taken the lead early in the match.

On Monday, however, the 2013 African champions turned on the style inside an empty Stade d’Agadir in Morocco, scoring ten unanswered goals against the Falcons and True Parrots. Osimhen was the best of the bunch.

This is the worst loss in Sao Tome and Principe’s history and the most lopsided victory in Nigeria’s history.

Peseiro is happy with his team’s three points in the race to qualify for the 2023 Africa Cup of Nations, more so than the impressive scoreline. 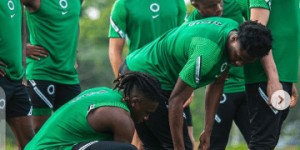 Substitutes Ahmed Musa and Umar Sadiq each contributed to a goal, and the game’s tempo didn’t change despite using five subs in the second half. Simultaneously, Emmanuel Dennis scored a late-game penalty expertly converted by the winner.

They were just as impressive to Peseiro as the starters.

Regarding the 10-0 victory: It’s good, according to Peseiro, who was speaking to ESPN.

Three points are more valuable to us, so we should aim for that. Since we didn’t spend much time together in practice, I’d like to work on enhancing our team’s efficiency on the field.

This match was good because they tried to mimic our strategy, aesthetic, and overall concept.

As a result of the win, Nigeria maintains its position as Group A’s top team with six points and a favorable goal differential. 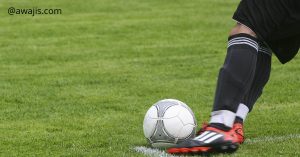 At Freetown, Sierra Leone earned their first point of the qualifying round by holding Guinea-Bissau to a 2-2 draw.

However, Guinea-Bissau is second in the group with four points after beating Sao Tome and Principe 5-1 on day one of the competition to take over the lead from the Super Eagles.

Please don’t forget to like and share using any of our social handles below. If you have any suggestions or contributions, you can drop them in the comment section below.