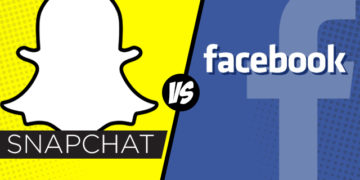 A Snapchat vs. facebook war of sorts to undermine Snapchat was ignited after Facebook failed in their bid to buy Snapchat 4 years ago.
It was in October last year that the world woke up to the news of Snapchat’s intention to head to Wall Street and become a publicly listed company. It felt like a good strategy in the Snapchat vs. Facebook spat that has been going on for a while.
What better way to arm yourself in a bloody fight with a tech giant like Facebook than to astronomically increase the amount of money in your war chest? In the software world, just as in business, more money is a tested and proven way to forge ahead of the competition.
In many parts of the world, a lot of quizzical brows would be raised eloquently asking if there was ever a Snapchat vs. Facebook war.

There is this tech legend about how Evans Spiegel, the founder and CEO of Snapchat, rebuffed a Facebook offer to buy the company. It is not a fiction though. It is just a legendary story considering what happened in subsequent years.
But first, a bit more details about the attempted Snapchat buyout by Facebook.
According to information first broken out by the Wall Street Journal, Facebook offered $3 billion dollars in cash to Snapchat to take over the company. That was in 2013, just two years after the Snapchat was founded.
Why did Facebook offer such a huge amount to a 2-year-old start-up that wasn’t even making a profit? The answer is in the demographics.
Young adults in the US between the ages of 19 and 29 were hooked on the app. In just two years, about 30% of people in that age group were already using the app and the numbers were increasing daily.
In about 3 months between June and September of that year, the number of daily messages (known as snaps) exchanged by users increased from 200 million to over 350 million.
But the crucial part for Facebook was the age bracket of users. Far too many kids were adopting Snapchat faster than Facebook. This didn’t bode well for the future of Facebook.
The kids of today would be adults of tomorrow. Which meant the adults of tomorrow would prefer Snapchat to Facebook. At which point, it is just inevitable that Facebook would lose its dominant position in the future.
At least, that was how Mark Zuckerberg and his team at Facebook saw it. And those men know a thing or two about the rise and fall of businesses.
So Zuckerberg and Facebook went to war to stop the rise of Snapchat. Thus giving birth to the Snapchat vs. Facebook war.
ad: Facebook News Feed and Fake News | #RIPTwitter Epitaph

Stealing or cloning of Snapchat features was the most obvious signs Facebook was out to deal with Snapchat for daring to challenge them on their turf.

Here is a brief history of that:

1. Just a year before trying to buy Snapchat, Facebook launched Poke. The app focused on disappearing messages, Snapchat’s unique feature. But Poke never gained traction with users
2. A year after trying to buy Snapchat, Slingshot was launched. This was just a better version of Poke. Again it had Snapchat’s disappearing messages as one of it features. The app lasted just a year.
3. An update to Facebook Messenger in 2014 included a feature for disappearing messages. It was dropped too after a while
4. Last year August, Instagram Stories was launched. This was a blatant cloning of Snapchat’s Stories.
The feature allowed users to share photos and videos of the day for up to 24 hours before disappearing. Instagram Stories is still around.
5. In October last year, Facebook tried to buy Snow, also known as the Asian Snapchat. The owners of Snow refused the offer.
6. In the area of acquisition, Facebook successfully bought over Masquerade (MSQRD in short). Bought in March last year, the app, like Snapchat, has amazing photo filters to help users tweak their images.
Facebook has already integrated MSQRD into many of its proprietary softwares.

In the Snapchat filing last year of its intention to float the company’s stocks, Evans Spiegel and his financial advisers figured a valuation of $40 billion was fair for a fast growing app with a young user base.
The excitement of that filing with the Stock Exchange led to comparison with Alibaba’s IPO in 2014 which valued the company at $160 billion.
The March IPO however, was a bit of a let down for Snapchat. Though many shares were bought leading to a final valuation of Snapchat at $30 billion, Evans Spiegel and his team had projected the numbers to be far bigger than that.
There are two contexts or narratives here. The first is the reality of the situation. Snapchat is not a profitable business. As a matter of fact, they have been running at loss for some years now.
Smart investors would never hedge their bets on a losing business that only promised huge profits in the future based on projected growth of the user base. Meanwhile, the anticipated growth of the user base is showing down due to the activities of a rival.
The second context is the disappointment of the whole IPO. In the sense that Snapchat had really expected much more than what they got. After all, they were the in-thing every youth wanted. The future was obviously very bright.
Perhaps investors were not too impressed with the structure of the IPO. Thing was, Snapchat did not fully offer the company to the public. Many stocks were not made available to the public. These remained under the control of Spiegel.
And these shares gave him absolute control of the company. Investing in a company one had no say in decision making was really not a good business strategy for savvy investors.

What next for Snapchat

It is too soon in the day to know if Snapchat would go the way of Twitter which stagnated after a promising start. The jury is still out on that. And it might take a few years before we can say for sure if Snapchat had prevailed in the Snapchat vs. Facebook war.
The signs though are very familiar. It happened to Twitter and many other companies that attempted to steal Facebook’s mojo. Snapchat could just be the next. Never completely dead, but just surviving on the crumbs it can get from the total dominance of Facebook.