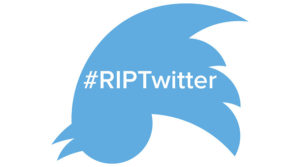 Listening to the doom’s day predictions about the future of Twitter, the world would wake up one day to the scary thought of a world without Twitter. Because, while we were sleeping, Twitter quietly passed on; #RIPTwitter had become reality.
Talk about the demise of Twitter gained traction about two years ago. Ironically, it was Twitter’s most iconic feature, the hashtag, that made that prediction viral. #RIPTwitter quickly became popular among Twitter users when it was coined as a prank.
Today, #RIPTwitter is not just a prank anymore. Some people stake their reputation on it happening sooner or later. While some claimed it has already happened. What the world is seeing now, they claimed, is a walking dead business.
For a while last year it almost came to pass. At least officially. More on that later.
For now, the question is, what prompted people to predict the end of the social networking site, now branded as a ‘news’ app on Apple’s iTunes? The short answer is not too complicated: the numbers showed Twitter had flat-lined in all the important indices that makes the business model a viable concern going forward.

1. Twitter has just over 300 million subscribers or users. That is not a bad number by any standard. But that number is a bit misleading.
A large chunk of the people that make up that number are not active. And to be honest, the 300 million mark was reached about 3 years ago.
That meant for the past 3 years, Twitter has not added any significant number of users to its subscriber base. It has effectively stagnated.
2. A few years after Twitter was created, it was Facebook’s biggest rival. At the time, some analysts even swore that Twitter would soon surpass Facebook.
The numbers since then, show otherwise. Facebook has grown to over 1.5 billion subscribers since those heady days.
3. Even Snapchat, founded about 6 years ago has surpassed Twitter in the number of daily users.
4. The financial results, the bottom line, doesn’t tell a better story about the health of Twitter.
The latest financial quarterly results show that Twitter made a loss of about $167 million. A year earlier the loss was $90 million. Clearly indicating the business is making less and less money each year.
For greater perspective, the latest results made it the tenth successive quarter Twitter would be posting a net loss.
Since these numbers didn’t happen suddenly to Twitter, what was done to stop the business hemorrhaging money so badly?


The history of Twitter should have Jack Dorsey’s name scribbled in indelible ink. He was one of the co-founders of the company over 11 years ago.
Dorsey and the co-founders made the decision to appoint Dick Costolo substantive CEO in 2009 to oversee Twitter’s IPO. Costolo made a good job taking Twitter to Wall Street as the stock value of the company rose.
But a few years later, profits started slowing down and finally, Costolo had to step down, in 2015, as shareholders felt he had nothing more to offer.
After serving as interim CEO, the decision to make Jack Dorsey the substantive CEO seemed like the right choice. Twitter was his baby. He knew the company inside out. If anybody could reverse the fortunes of Twitter, it was Jack Dorsey.
Just 38 at the time, Dorsey went to work to revamp his baby.

One of the most talked about move to put Twitter on the upward trajectory was the decision by Dorsey to boost visibility in the app store.
Twitter was categorized as a social networking app in Apple’s app store, iTunes. But that puts it below Facebook, WhatsApp, Instagram, Messenger and Pinterest among others in terms of visibility to new users.
The plan was simple, designate Twitter as a News app and let it compete with other apps in that category. In the News category, it was at the top of the list in terms of downloads.
That meant when new smartphone owners want to download a news app from iTunes, the first app they would see is Twitter. Which in turn meant more and more people are likely to download and use Twitter, thereby boosting the subscriber base.
One year on, it can be safely said that the plan failed. Twitter is still not attracting new users in droves.

Periscope, the live video streaming service, was launched in 2015 by Twitter to stop the slide of the company. Video was seen as the next big thing for social networking sites like Twitter. That was why for a while it seemed Twitter had found an exclusive gold mine. Periscope made Twitter fun to use again.
However, the honeymoon didn’t last long. Facebook decided to steal the Periscope thunder by launching its own live video streaming service, Facebook Live, to the wider public almost a year later.
With their subscriber base, Facebook Live was simply too much for Twitter’s Periscope. And so that dream of a revival was crushed under the Facebook Live bus.

Other upgrades to halt the slide to oblivion

Nobody can accuse Jack Dorsey of not doing his best. The series of upgrades rolled out showed a man who really gave it a go.
For instance, he recently made it possible for all users to have a Twitter verified account which was once the exclusive preserve of the famous.
The Twitter feed was tweaked to incorporate an algorithm timeline so that users would never miss tweets that were important to them.
Even GIF uploads were not left out in the massive Twitter revamp. The maximum allowable GIF file was increased to 15MB. This apparently gave subscribers more flexibility in making fun GIFs.

All social networks by their nature, are virtual worlds where people exchange ideas, mostly with words.
When Twitter started, the idea of using just 140 characters to pass on a message was fun. Tweets were easy to create and upload. One could argue that it made sense considering the cost of data at the time and the fact that people were just getting to grips with the phenomenon called social networking.
Time changed everything. Data became easier to access and far cheaper. Social networks was now the in-thing of Web 2.0. People now had more things to say to wider audiences as internet penetration around the world improved
140 characters were not going to cut it by a long shot. People wanted to be given the freedom to say as much as they wanted without the 140-character restriction.
To Jack Dorsey, removing that unique aspect of Twitter was like removing a vital organ from his body. He created it to make it stand apart from the likes of Facebook. It was Twitter’s identity.
Unfortunately, that uniqueness is most likely the main reason Twitter is in such a mess.

#RIPTwitter and the future

For a time last year, it seemed #RipTwitter would become official. There were strong rumors that companies were negotiating with Jack Dorsey to buy Twitter.
The rumors were so strong Twitter’s shares on the stock exchange even rose in value for a while before crashing back again.
The sale never happened for some reasons. Twitter is still soldiering on grimly, determined not to go down without a good fight. And for Jack Dorsey and his crew, going down without a last hurray (perhaps cashing out with a big money sale) is not an option.
#RIPTwitter would just have to wait for a while to become a real epitaph.