Are you looking for popular Native American last names and meanings? This post will provide you with the best of the best. Names are more than just a means of identification; they are a powerful means of expressing oneself. 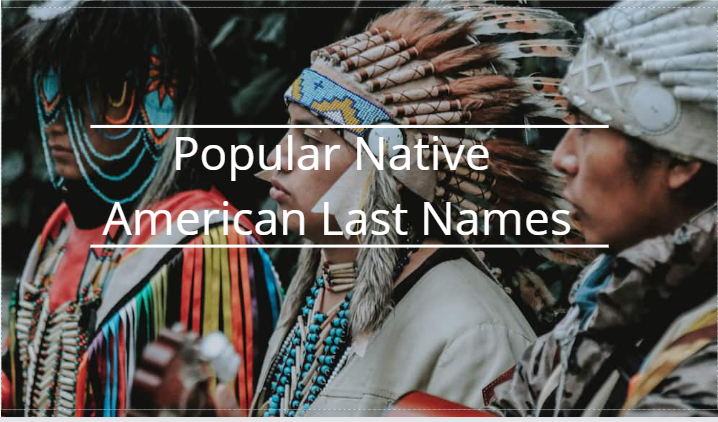 Long before European settlers came to North America in the 15th century, most of the continent was inhabited by Native Americans. These people had traditions that guided their activities, names, beliefs, and associations, just like many other cultures.

Most native American surname names were based on a person’s birthdate, profession, temperament, clan, and place of residence. The British, French, Spanish, and Portuguese finally had an impact on the names of the native Americans.

There are many different tribes or subgroups that make up Native Americans. The Navajo, Cherokee, Apache, and Sioux are the four most well-known. Native Americans Last names were passed down through generations over time.

This article lists over 100 popular native American last names and their meanings.

The Southwestern United States is home to the Native American group known as the Navajo. They are well-known for their hand-woven rugs and blankets. The Pueblo people taught them how to weave cotton first. When they began raising sheep, they shifted to wool. These blankets were precious and could only be purchased by rich chiefs.

The Navajo speak an Apachean language that belongs to the Athabaskan language family. The Cherokee Nation is the next-largest tribe in the country after this one.

The Cherokee are an indigenous group of the United States that live in the Southeastern Woodlands. It is one of the largest tribes in the United States, with over 430,000 tribal members worldwide. More than 141,000 Cherokee Nation members live on the tribe’s reservation in northeastern Oklahoma. The Cherokee language is part of the Iroquoian language group.

The Apache were originally from what is now the Southwest United States. The Apaches are divided into several subtribes. The Jicarilla, Chiricahua, Salinero, Lipan, Mimbreo, Mescalero, and Ndendahe.

Dakota, Lakota, and Nakota are the three subtribes that make up the Sioux tribe. Sioux warriors were renowned for their prowess. The Sioux language is part of the Siouan language group.

Native American last names are among the most distinctive names that may be given to a child in today’s society. This is because most native American tribes have now embraced the influences of other cultures, which is most apparent in their modern-day naming traditions.

bblog
How to Verify Waec Result for WES: Know the required documents and application process for verification of WAEC…
bblog
Are you considering purchasing a new SIM card or do you know someone who urgently needs one? If…
bblog
100 Rib-tickling SpongeBob Squarepants Memes: Are you a fan of the SpongeBob Squarepants Nickelodeon show? You will definitely…
bblog
Android Cast Feature… With the cast feature in your Android smartphone, you can view your phone’s screen on…
SScholarship
Tempus Public Foundation Scholarship 2022/2023 for Young People. Apply for Tempus Public Foundation Scholarship 2022/2023 for Young Christian…
bblog
Obafemi Awolowo University (OAU) Fees for the 2021/2022 Academic session. Obafemi Awolowo University (OAU) management has published the…