A list of banned items by the Joint Admission and Matriculation Board ahead of the 2018 Mock exam as well as the main exam has been released. Read the List Of Items To Avoid Taking To JAMB Examination Hall below: 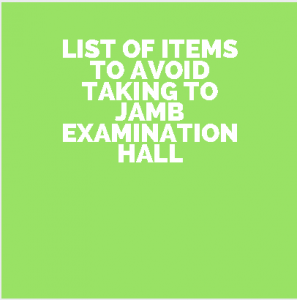 The prohibited items are

Whereby an examination official (board staff or ad hoc staff) or any authorised person is found with any of these prohibited items in the examination hall, such compromising action would be treated as a deliberate act of examination sabotage and necessary sanction will be applied.

These are part of the steps being taken by the JAMB Monitoring Goup, a Civil Society Groups inaugrated by the JAMB Registrar, Prof. Is-haq Oloyede, in checkmating examination malpractice.

Last year, the groups were reputed to have assisted in giving information from the field and transmitted several challenges, as applicable, to JAMB officials which helped in curbing the high rate of examination malpractices in 2017.