John Cena is among the top superstar in the WWE universe. He earns the respect and admiration of fans and fellow wrestlers alike. He is charismatic, admirable, of good sportsmanship and he shows res silence and courage.

He is an American professional wrestler, bodybuilder, rapper, and actor who has a net worth of $60 million. John Cena first became famous as a WWE professional wrestler. He has since transitioned to an A-list actor and television presenter. He is also the current host of Are You Smarter Than a Fifth Grader? on Nickelodeon and has starred in various films. 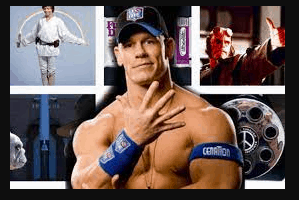 In the last fifteen years, ‘one of the greatest superstar in WWE’ tag is synonymous with John Cena, he is also a man of absolute wealth, WWE always display his merchandise monthly, which is very impressive.

The 16-time WWE World Heavyweight Champion works hard and gets rewarded handsomely for it. With the possible exception of Vince McMahon, WWE’s Chairman of the Board and Chief Executive Officer, nobody in the company works harder than Cena. He is constantly on the road and making appearances outside of the ring promoting the WWE brand.

Numerous publications have Cena’s net worth pegged at $35 million, including Men Health’s in its June 2016 issue featuring the WWE Superstar on the cover. That, however, is a guesstimate since his net worth has never been confirmed. Based on his rumored earnings from WWE and outside of the ring, it’s highly possible.

According to Wrestling Observer Newsletter editor Dave Meltzer, Cena “is closing in on earning $10 million per year” from WWE alone. This figure appears right given Meltzer’s credibility and what other top WWE Superstars, such as Randy Orton and Brock Lesnar, reportedly earn.

TMZ reported in July 2013 that Orton was earning $291,666 per month from WWE. As for Lesnar, his contract with the company reportedly pays him $5 million per year. While it’s unclear if those numbers include earnings from merchandise sales and video game royalties, they’re enormous figures either way. It’s possible that Lesnar, who inked a new contract with WWE in 2015, and Orton are earning more money now.

Meltzer also reported in November 2015 that Cena was WWE’s top merchandise seller, with Roman Reigns coming in second. That also explains why Cena earning almost $10 million per year is not surprising.

In an interview with Men’s Health, Cena said that while his paycheck does not compare to what his brother makes as a police officer, his service drives him, as well as the military.

“My brother is a 25-year cop,” Cena said. “Every day he takes his life into his own hands when he puts on the Kevlar. He’s not getting the same paycheck, I am, but he loves what he does. He protects the streets every single day. That’s what I’m grateful for.”

Having dipped his foot into Hollywood, Cena’s earnings aren’t only limited to WWE. He has starred in action films such as The Marine and 12 Rounds while putting his comedic chops on display with Amy Schumer in Trainwreck. In 2015, FOX enlisted Cena to host and executive produce American Grit, a military-inspired reality competition show. Endeavors outside of WWE should safeguard his financial prospects in the future when he’s ready to hang up his sneakers.

An avid car collector who spends a lot of money on powerful vintage cars, Cena’s garage includes a 1969 Chevrolet COPO Camaro, a 1969 Dodge Daytona, a 1971 Plymouth Road Runner and a 1971 Pontiac GTO. He currently resides in the private, gated community of Nature’s Reserve in Land O’ Lakes, Florida. His waterfront home, valued at about $750,000, includes a boat dock and swimming pool.

John Cena’s career is built on the solid foundation of hard work, determination and persistence drive. It is worthy of emulation.

How Much is John Net Worth?

Currently, John Cena is worth $60 million

✔✔ Ask Awajis
The Ibaka Oil and Gas free zone was recently approved by the Nigerian government and is located at…
✔✔ Ask Awajis
You will agree with me that Fashion is a thing that has been evolving over time. This is…
✔✔ Ask Awajis
Looking forward to buying textile materials and yet don’t know the company that produces quality textiles in Nigeria?…
✔✔ Ask Awajis
Welcome to awajis.com. Here today, we will be discussing the cost of tuition and living for students who…
✔✔ Ask Awajis
Short video apps have been popular among mobile phone users since the launch of TikTok. TikTok’s daily active…
✔✔ Ask Awajis
Do you want to apply for admission at a Nigerian polytechnic but don’t know if your polytechnic of…