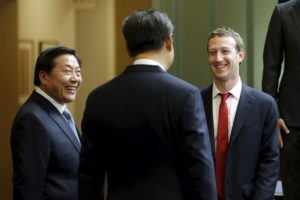 For Mark Zuckerberg, Facebook must conquer China, not so much for the ad revenue as preparing the stage for the Messenger app of the future.
A small trivia for you: when was the first time Mark Zuckerberg, the CEO of Facebook, embarked on a visit to China? Okay, a little Internet search would tell you it was back in 2010.
That is really surprising considering that Facebook was founded about 6 years before the visit. Visiting China by big firms with plans of world domination is per the course for global CEOs.
After all, China was growing at an alarming rate and the economy was expanding faster beyond any body’s imagination.
Perhaps, Mark Zuckerberg did not envisage the ban placed on Facebook in 2009 by the Chinese government. As far as he was concerned, Facebook had China already locked down like other parts of the world.
But then came the ban in 2009 which most people think was directly related to the riots in Xinjiang province between Muslim Uighurs and Han Chinese. Pictures of the riots were shared on the social forum which embarrassed the Chinese government. Hence the ban.
So Zuckerberg’s first visit a year after the ban was seen as a move to convince the government to unban Facebook in China.

Why is China important

The size of the Chinese market is the only factor here. One can imagine Mark Zuckerberg having nightmares over the money Facebook is not making as long as the ban stays.
China has the highest number of Internet users. This, coupled with an economy which is the second largest after the US, makes for a large revenue stream from adverts. The figures would surely run into billions in lost revenue for Facebook.

The latest yearly financial reports released by Facebook for the last quarter of 2016 showed a company that surpassed all expectations in total revenue for the year.
A figure of about $8.81 billion puts Facebook among the top echelon of global giants. But, with China in the picture, that figure could have been a lot more than that.
As of this year, the number of Internet users in China stood at about 731 million. That is almost the population of Western Europe: a huge number that is not actively using Facebook because if the ban.
While Facebook can brag that they have about 1.2 billion daily active users on the social forum, they wouldn’t mind the hundreds of millions that would be added to the active user base if their services were open to Chinese users.

Facebook prides itself of not succumbing to pressures from foreign governments to open up users data to security agencies. But it seems with China, Zuckerberg is prepared to break Facebook’s own rules.
Perhaps it was a sign of desperation from Facebook that they were willing to censor some contents in News Feed to satisfy Chinese regulators and get a foothold in the country again.
If the reports turned out to be true, it would be a massive blow to Facebook’s credibility as the purveyors of the truth.
But Facebook may be chasing a dream if they think getting unbanned in China would translate into hundreds of millions of active users and therefore more money in the bank.
Here is why.

The fact that Facebook has been banned in China doesn’t mean Chinese citizens are missing out on something. It is very unlikely the Chinese would be rushing in their millions to open accounts with Facebook if it is unbanned.
The fact is, right now, there are several social forums with millions of subscribers that would compete favorably with Facebook. The best known and biggest is Weibo, which has about 300 million users in China alone.
Weibo is not just a Social forum though, it also acts as a place where users can get their news, do online shopping and much more.
As matter of fact, almost every major Internet service like Google, Twitter, Instagram, Snapchat, Pinterest and thousands of regular websites are also banned in China. But the Chinese also have functional alternatives to all of them.
For instance, Baidu is the go-to search engine for chines citizens while Zhihu is the Chines equivalent to Quora.

It is most certain Zuckerberg knows conquering the Chinese market is not going to be easy. There are examples of US companies getting burnt by the Chinese adventure.
Examples of tech firms who bit the dust in China include Uber, who after investing over $2 billion dollars, had to concede defeat by partnering with the local alternative, Didi Chuxing. Even Apple recently announced a huge fall in revenues coming from China.
However, for Mark Zuckerberg, China is much more than just the numbers and the expected ad revenues. Zuckerberg has shown a remarkable ability to take a long-term view on projects with profits as an icing on the cake.
For years now, he has been sinking million into developing Project Aquila, the unmanned, solar-powered drone to be used to beam high-speed Internet to remote areas of the world.
Nobody has any idea what he intends to do when the project is completed.
For the China project though, it is easy to make a fair guess. Facebook is more likely to evolve into more than just a social forum in the future.
This is most apparent in the huge resources invested in services like Facebook Messenger. Perhaps, Zuckerberg wants to clear the political hurdles of having Facebook in China before Messenger, or a future iteration of Messenger, is ready to be unleashed on the world.
The likelihood of an alternative to an all-in-one app like Messenger in China is practically zero. You guess is as good as the next person’s that even the Chinese would be rushing to subscribe to this super app in the future.
Before signing off, here is another trivia for you: When was the first time Mark Zuckerberg spoke with a world leader entirely in a foreign language and who was that world leader?
The answers are a good pointer to Mr. Zuckerberg’s determination to woo the Chinese authorities to see things his way.
By the way, Zuckerberg first spoke entirely in a foreign language to a world leader in 2015 to Chinese President Xi Jinping.
Also present at that meeting was Lu Wei, the head of Chinese Internet regulatory agency. He is the man who would be responsible for unbanning Facebook in China.