Dark Web – The dark web is invariably mentioned anytime you hear hackers talking about illegal activities on the Internet. Not just hackers though, just about anybody can get access to the dark web if they how. It is quite easy. 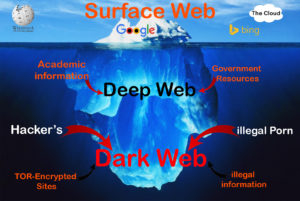 What is the Dark Web?

The dark Web is sometimes described as the ‘underworld of the Internet.’ With a sobriquet like that, it is not hard to form the impression that everything that goes on there is illegal.

First off, you need an encrypted software/browser to gain access to these sites. Almost all the websites hide their entity using an encryption tool known as Tor. I guess it is for that reason the Tor browser is the most well-known browser used for accessing the dark web.

If you’ve ever used a good VPN software to hide your location, then you have an idea of how the Tor browser works. Tor though is free to download and use, unlike the very best VPN software.

What Happens in Dark web?

The dark Web was created out of concerns for Internet Security. For many reasons, people need to hide their location while online to avoid detection.

For instance, political activists in countries like Iran, China, Russia and North Korea to mention a few, would need secure encryption to send or receive messages online to their friends and supporters abroad.

However, like everything good, it has been perverted by people with bad intentions. Every illegal activity can be carried out openly in the dark web without fear of detection. At least if you don’t mistakenly give out your real identity, you would remain undetected.

Let say you want to hire a killer, there are sites on the dark web where people advertise such services. You can contact your man, give them the necessary details and pay up. You got yourself a killer.

Perverts frequent there a lot to source for child pornographic material. Anything you want, you can get there it. You just need to know where to look for it.

How Cryptocurrency is Fueling Crime in the Dark Web

Cryptocurrency was formed as the means of exchange of the Internet. The basic idea was simple: to create a currency that transcends political boundaries.

The most popular of these currencies is Bitcoin. Bitcoin has become successful beyond the imagination of the creators. People now use it as a legal tender for all kinds of online transactions.

The entire architecture of Bitcoin makes it possible to have a virtual wallet online where one can store bitcoins, just like a bank account. In this case though, you can hide your details from the world. Which means you can pay for anything with bitcoins without leaving a trace back to you.

It wasn’t too hard for criminals in the dark web to recognize how Bitcoin can be used to transact business easily. Anybody can source for Bitcoin legally. The bitcoins are then taken to the dark web to pay for services.

Also see: Web 3.0: Is the Next web Already Here and Changing Our Lives?

Once upon a time, if you need to do something illegal, you have to meet the criminal or their go-between in some dark corner to whisper out your desires.

People were not too hot on the idea of meeting criminals. It made denying the deal later on difficult. Besides, bad things could happen to you while meeting the criminal.

But with the dark Web, crime has being liberalized. The playing field was now leveled for everybody concerned. You can stay in your living room and order the murder of your enemy half a world away in a different country. No need to meet anybody….. and no trace back to you.

The dark Web really expanded the frontiers of crime.

Earlier, mention was made of how hackers normally find refuge in the dark Web to do business. When they wish to sell important information gotten illegally, the dark Web is where to head to for buyers.

But it is not always so easy to sell information. The information must be valuable, and buyers must see how it can be exploited. Sometimes, if buyers can’t be found, the information is simply dumped in a dark web website for anybody to access.

Hackers sometimes face what I call the ‘Snowden conundrum.‘ Edward Snowden in 2013 released highly classified CIA files to the public.

The information he released publicly, caused serious diplomatic upheavals around the world. The activities of governments in collaboration with big corporations to undermine the security of citizens were exposed in the leaked documents.

For Snowden, the choice he made was based on trying to make the world a better place. He had the choice of also selling these files secretly on the dark web. But he chose to release the information openly. He was still declared a criminal by the US government.

Hackers sometimes face that conundrum. Whether to sell the information privately or to release it openly. Some of them believe dumping the files for everybody to access is for the greater good of the world.

However, they are still criminals in the eyes of law enforcement agency

Going after bad people in the dark Web is never easy. Law enforcement agencies have to behave and think like criminals.

The most effective way is to go undercover in the dark web with fake profiles. Then engage with some of the criminals there hoping that they would reveal something about themselves that would lead to an arrest.

However, savvy criminals always escape capture. They are too good to let slip any information that would lead to their arrest. So most times, it is their naive customers who fall prey to security agencies.

Cleaning up the dark world is, therefore, a non-stop work. There would be small victories and big arrests from time to time. But just like in real life, the criminals logging into the dark Web are getting more sophisticated,

lways looking for new cutting-edge tech inventions to keep them several steps ahead of the good guys.
The security agencies, on the other hand, are always playing catch up.