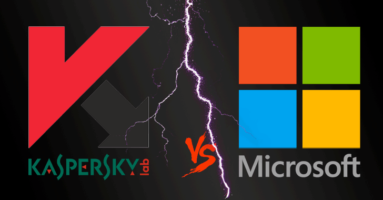 Until a few years ago, one of the first things people did after buying a new Windows PC was to secure the system by downloading any of the numerous free anti-virus softwares on offer.
This made logical sense because Microsoft in their wisdom, refused to include a good anti-virus in the Windows operating system.
This was not a big deal though. There were lots of anti-virus softwares been offered free for downloads by developers. Users were actually spoiled for choice.
The free anti-virus softwares were good enough to protect your system against viruses and malware. At least, they were good enough for most people who don’t require too much security on their system.
Big companies, government, and individuals with big secrets had to invest in the paid apps to get enhanced protection. The world was cool with that arrangement.
However, it seemed Microsoft have had a change of mind about including their own anti-virus software from what Kaspersky is saying.

Kaspersky is a Russian company well known for developing the popular Kaspersky anti-virus software. They recently filed a lawsuit against Microsoft claiming anti-competitive tendencies from Microsoft.
The lawsuit filed with the German Federal Cartel Office and the European Commission basically hopes the two bodies would compel Microsoft to stop disabling Kaspersky’s anti-virus in the newer versions of Windows operating system.
The lawsuit described how Kaspersky anti-virus was disabled anytime Windows users updated the software. After disabling Kaspersky, the update automatically activates Windows Defender to make it the default anti-virus in the system.
What these means is that millions of Kaspersky anti-virus would be disabled around the world as people upgraded to newer version of the Windows OS.
And it is going to get worse for Kaspersky and other anti-virus softwares if Microsoft is not checked.
Most computers, for now, are still running the older Windows 7; but in future, when people buy new computers, Windows Defender would be the default security as others would be automatically disabled.

Why Microsoft is pushing Windows Defender

Windows Defender was actually made available for free downloads for Windows XP and other versions of Windows OS in 2005. It was basically a spyware with limited functions.
Not many people jumped onto the Windows Defender bandwagon. Better and free anti-virus softwares were already in the market.
However, with the activities of malicious hackers on the rise in recent years, it made sense for Microsoft to include Windows Defender as part of the OS.
After tweaking the software to make it a more effective and complete anti-virus software, it was shipped out as part of Windows 8. And just recently, Microsoft decided to make it the default anti-virus in new systems or after an upgrade to the newer Windows 10.
That is where Kaspersky had issues with Microsoft. Microsoft wanted to run them out of business they claimed.

This is not the first time Kaspersky is filing a suit against Microsoft over the same issue. Last year in November, they filed a complaint with the Federal Antimonopoly Service of Russia outlining how Microsoft was using their dominant position to stifle competition.
A meeting was arranged between Microsoft and Kaspersky to smoothen out differences. Microsoft promised to make changes to their Windows OS so it won’t disable other anti-virus softwares during an upgrade.
The present lawsuit showed Microsoft didn’t do enough to placate Kaspersky.

History about to be repeated?

It seems 19 years is the right length of time for history to be repeated as far as Microsoft is concerned.
It was in 1998, that the US government and several states in the US dragged Microsoft to court over anti-competitive practices. The Kaspersky accusation read like it was copied from that lawsuit with a few changes here and there to reflect the passage of time and specific softwares.
One option discussed during that long lawsuit with the government was to break up Microsoft into smaller pieces to reduce their dominance in the market.
Microsoft avoided a breakup over issues of technicalities when they appealed the initial judgment that called for a breakup. The case was settled 3 years after it started.
The settlement involved Microsoft agreeing to terms that relaxed their stranglehold on computer applications.
But the US case was not the last one Microsoft faced. In 2009, the company had to settle a similar case with the European Union. And just 4 years ago the European Union slapped a fine of $730 million on the company for similar offenses.
Microsoft is still appealing that fine.
Google too, another major tech company with its market-dominating Google Search and Android OS, is facing antitrust charges from the European Union. The Google antitrust lawsuit started just last year.
One gets the feeling that companies like Microsoft think they can do as they please and get away with it. With expensive lawyers and lots of money to pay any fine, the story so far is that they can actually move ahead with such practices.
Perhaps, the fact that Microsoft lost its dominant position by the end of that lawsuit with the US Government did not teach them any lesson.

An Unequal battle with many repercussions

Kaspersky cannot hope to successfully tackle Microsoft alone. They simply don’t have the resources to wage a long drawn-out legal battle. The only hope is to convince the regulatory agencies to see their point of view and take up the fight with public funds.
The alternative can only be dire for other apps and innovation in the anti-virus niche. The world might then be faced with a situation where Windows Defender is the only viable anti-virus software for most computer users.
This is because, with reduced downloads (whether free or paid), the independent softwares would simply fold up from lack of revenues.
The world really cannot afford another Android or Google Search monopoly. People need options in life. Monopoly, to put it mildly, kills the creative energies of communities.
And like the founder of Kaspersky said, this sort of practice from big firms like Microsoft must be nipped in the bud before it becomes a monster too big to handle or tamed.