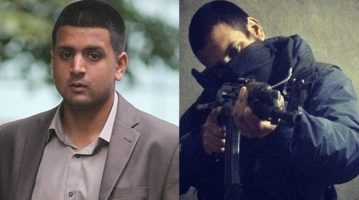 By 2011, Junaid Hussain, whose parents were from Pakistan, was just a 17-year-old kid living in Birmingham, England. He had so many things going for him.

In the day time, he and a group of friends played around thinking of making it big as rappers. At night his computer took possession of his attention.

In the digital world, he was not aspiring to be anything. He was already something. A hacker, known as Trick, with hacking credibility.

He had already formed a hacktivist group known as Poison. Poison was affiliated with the hacking group Anonymous. This was the life of young Junaid: an idealistic teenager fighting for the oppressed on the Internet
But in just 4 years, his name had appeared on the list of the most wanted terrorist in the world.

As a matter of fact, he was third on the list after the head of ISIS, Abu Bakr al-Baghdadi; and the British-born terrorist, Jihadi John, notorious for beheading hostages in ISIS-held territories.

Read Also: Top Software Companies in Lagos
And in August 2015, at the age of 21, he became the first hacker to be killed deliberately by a US drone attack.
How did a fresh-faced British kid of just 17 who used to hack for fun become one of the world’s most wanted terrorist in just 4 years?

The Road From Online Hacker to Terrorism

Nobody would ever know for certain if the trajectory of Junaid’s life would have been different if his online gaming account was not hacked.

According to an interview he granted in 2012, he became a hacker after his gaming account was hacked. The reason was simple: he wanted to exact vengeance and to help others.

Things though turned out differently. He took to online activism through hacking the way ducts easily take to water. It was the perfect fit for him to express himself.

Read Also: How to Pay DSTV or GOTV Subscription Online

His feats were legendary. Some people are of the opinion that Junaid Hussein, just like most kids, exaggerated some of his deeds.
Some of the deeds he perpetrated or allegedly executed as a teenager included:

How Was Junaid Arrested?

Junaid Hussain was arrested after hacking Tony Blair’s personal assistant’s email. He was tried and sentenced to serve six months in prison.

According to people close to him, his arrest made him very bitter. He started mumbling about how hacking was not enough to make a difference in the world.

By the time he was released, Junaid Hussain had cut ties with most of his friends, including the ones in the Poison hacker’s group. He stopped posting on his Twitter account.

Read Also: FlyAero Online Booking And Reservations
For starters, he had changed the name from Trick to Abu-Hussain al-Britani. What used to be a flag of Palestine wrapped around a child was now a picture of himself holding a rifle aimed at the camera.
In August 2014, his new Islamic wife posted a message on Twitter that they were now in ISIS-held territories. He was now a Jihadist with a known terrorist organization.

Why Was Junaid Regarded as an Important Man in the Society?

As Abu-Hussain al-Britani, Junaid Hussain used his skills to the advantage of the terrorists. He became one of the most important members of the terrorist’s hacking team known as CyberCaliphate.

He started training other people to hack bank accounts and credit cards. The same method he used in the ‘Free Palestine’ campaign when Israeli credit cards were targeted.

He used his experience as a rapper to produce top quality audio propaganda clips for ISIS. And with his experience at Anonymous, he was able to organize and lead the digital arm of ISIS operations with devastating effects.

Read Also: How to Start a Successful Online Business

Before Junaid Hussain joined ISIS, nobody had heard of CyberCaliphate. However, he made the group very notorious after hacking the Twitter account of the U.S Central Command.

The most famous attack on a media house took place in April 2015. He hacked, and for several hours, took control of a French television network. He used those hours well to broadcast ISIS propaganda to the French people.

At this point, he had to be stopped. Because given enough time, he would have committed far worse hacks. He had enough money from ISIS to do as he wished.

The killing of Junaid Hussain: How Did it Happen

Authorities knew he was in Syria. But getting his exact location was the problem. So they played a trick on him. The sort of trick he must have played on many of his victims in the past.

He clicked on a link sent to him by undercover security agents.

First, securities operatives in Britain were able to get his username on Surespot, a secure messaging app he loved using. The undercover agent sent him a friend request which he accepted.

Later, the undercover agent, on the pretext he wanted to show Junaid something important, sent him a ‘poison’ link. The poison link led to an unknown website known as a ‘waterhole.’

Read Also: How to view my Facebook profile as someone else

In the hacker’s universe, a waterhole attack involves sending links that ‘poisons’ the code on a website. Clicking it would completely take over the computer or device.

For Junaid Hussain, his device of choice at the time was his phone. He inadvertently downloaded a virus when he clicked the link. When he made a call later with the phone, the operatives were able to pinpoint his location easily.

With the information in hand, it was simply a matter of inputting the coordinates into the drone and sending it on its way to kill Junaid Hussain.

Unknown Lesson to Learn About Junaid

The Junaid Hussain episode proved once again that human motivations cannot be accounted for.
Junaid could have made a lot of money through the bugs bounty programs of several tech firms if he wanted to. But like most people in Anonymous, he decided to be an idealist.

And history has shown that the jump from an idealist to a misguided crusader is short. What is well documented is that a 21-year-old terrorist was killed by a drone strike. He happened to be a brilliant hacker and a British citizen.

Many British citizens have been following that route even before Junaid. And more will join in the future.
There are no lessons to be learned here except the knowledge that a young brilliant man lost his life needlessly.

2 thoughts on “Junaid Hussain: Hacker Killed By A U.S Drone”