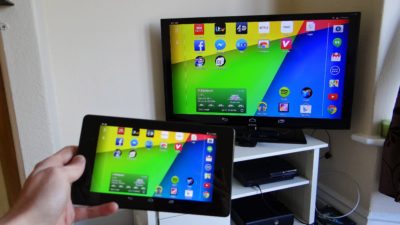 With the cast feature in your Android smartphone, you can view your phone’s screen on a much larger display like a TV or a computer display.
The cast feature or mirror feature of a smartphone is one feature many people don’t know how to use. It begs the question of why you buy a smartphone and never get to use some awesome features 0n the phone.
And the good thing about using the cast function is that you don’t have to spend much money to get it going. Sometimes, you won’t spend a dime to get it running.
So what is the cast function all about?

What is the cast feature?

In simple terms, the cast feature in Android phones (it is also available for iOS devices) is a technology that allows people to project whatever is on the Android screen to a much larger screen like a TV or computer monitor.

The advantages are immediately obvious. The most apparent is that, with the cast feature, a larger group of people could view the display comfortably.

For instance, you can use this feature to watch a movie on your device with family and friends on your larger TV screen. And you can also project files onto a larger screen so your colleagues at work can look at what you are trying to say without having to huddle together in a tight, uncomfortable way.

Before the advent of the cast feature, the traditional way of viewing your device’s screen on a larger display is to use cables to attach the two. The cast, though, is wireless—no need for cables.
Not all Android phones have the cast feature embedded in them. To determine if your phone is compatible, tap on ‘Display‘ under ‘Settings.’ If your phone is compatible, you should see ‘Cast screen‘ or ‘Mirror display.’

The TV you want to protect the device display must also be compatible with the cast feature. Most modern flat screen TVs (LED) have this feature.

Knowing if your flat-screen TV is cast-compatible is not as easy as finding that out on your smartphone. The easiest way is to check the TV’s manual.

The next best way is to go ahead and connect both devices to see if it works. If it doesn’t, your TV is incompatible with the feature.

But that doesn’t mean you would never use the cast feature on your phone with your TV. Since most LED TVs come with an HDMI port, you can always buy a dongle specifically made to use this function.

You can also use the dongle option on computers if your computer does not support the cast feature. On the other hand, you can download a lot of software to your system to achieve the same goal.

But many of them promise the world. Most times, how effective they depend on your laptop’s specifications. So you might have to try a few before you get the one that works very well on your computer.

‘Casting’ your device to a larger screen.

So you now have everything you need to view your device on a much larger screen. We assume you bought a dongle like Google’s Chromecast or similar for this guide.

1. Attach the dongle to the HDMI port of your flat-screen TV. The TV should be plugged into a power source. Could you switch it on?
2. With your TV remote control, go to the menu and select the input source to which the dongle is connected. The setup menu display would appear on the screen.
Follow the instructions to get it going on your TV.
3. Go to settings on your Android device, open Settings > Display > Cast screen/ Mirror display (depending on how it is written on your phone model)
4. For those who don’t have the cast feature on their device, you can download and install it from Google Play Store. But make sure your device is at least an Android 4.4.
After installing, you can get the cast screen feature by opening the downloaded Chromecast app. You would see a cast screen in the menu.
5. Tap the cast screen on your device Android device
6. Click on ‘Enable wireless display. You should see your TV displayed in the list. Tap on your TV to begin casting.
You should now see your Android screen displayed exactly how it is on your TV screen. Now you can sit back, relax and enjoy those videos on your Android phone on your flat-screen TV.

Mirror your Android device to a PC using the cast feature

Casting your Android display to your PC, whether laptop or desktop computer, follows the same steps as the TV guide.

Again, the assumption is that you have already purchased a dongle that can connect to the HDMI port of your laptop.

1. Attach the dongle to the HDMI port of your system. Then follow the setup instructions that appear on the monitor.
2. Go to the cast feature on your Android smartphone and repeat the same process in casting the Android phone to a TV.
3. Enjoy.

Apart from using a dongle to cast your Android phone to your PC, there are other ways it can be done without a dongle. This involves the use of an app that you have to install on your smartphone and PC.

Several apps can mirror your Android display on the larger PC display.

The disadvantage of this method (though cheaper as you don’t have to buy the dongle) is that you have to try different apps until you get the one that works very well with your PC.
However, if all you want to do is view some documents on the larger PC display, most of the apps can handle casting very well.

Problems (like freezing and lagging) begin to pop up when you graduate to heavy files like HD videos and games.

If you want to give that a shot, this guide is as good as any to lead you through the process.

What Every Prospective Corp Member Needs for Orientation Camp

bblog
Know when your national ID card is ready for pick up online!!! The National Electronic Identity Card (e-ID…
bblog
Left-handed scholarships are educational opportunities available to all people who are left-handed. It is a type of student…
bblog
Nigerian Coat Of Arm: This article serves as a revelation to the untold story and facts behind the…
bblog
Here is a quick and exact guide on using the zenith bank USSD banking option for all your…
bblog
Applications for the 2022 NDDC Skills Acquisition Training Programmes has commenced. To learn every detail regarding the programme…
bblog
Nigeria is a great country richly blessed with human and natural resources, with fertile soil. Nigeria does not…