We’ll be comparing the Nano-SIM vs Micro-SIM today. We’ll be focusing on their characteristics, usage, and compatibility in this article.

To begin, there are three different sizes of SIM cards: standard, nano, and micro.

Every phone on the planet requires a SIM card, which can be any of the three different sizes listed above.

Giesecke & Devrient, a Munich-based smart-card manufacturer, is credited with inventing the SIM card in 1991. 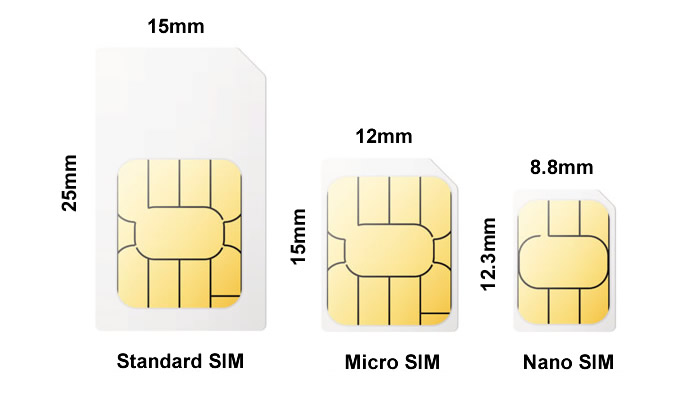 What is a Standard SIM card?

SIM stands for “subscriber identification module.” The standard SIM card was the first sim card ever created. It spans 15 by 25mm, which was the ‘standard’ size of a SIM card until the introduction of micro and nano-SIM cards.

Although the standard SIM card is no longer used in smartphones, it is still utilised in other sectors such as Mi-Fi, Wi-Fi, Routers, iPad, feature phones, and so on. The iPhone 3GS is the most popular phone that uses a normal SIM card, while the iPhone 4 uses a micro-SIM card.

What is a Micro SIM card?

Compared to a standard SIM card, a micro SIM card is much smaller in size.

The micro SIM was initially introduced in 2003, 12 years after the first standard SIM. One of the top devices with a micro SIM card is the Samsung Galaxy S5. Unfortunately, the card is no longer commonly used in the phone market.

What is a Nano SIM Card?

When it comes to size, the nano SIM card is the smallest of the Micro and Standard Sim Card. The card spans8.8 x 12.3 mm in size and debuted in 2012, nine years after the micro SIM card was first launched.

Because of its compact size and ability to provide more capacity for other functionalities, phone makers today overwhelmingly favor the nano SIM card. If you purchase a new phone, it will come with a Nano SIM card slot.

It’s difficult to envision the SIM card growing any smaller. In this version, the chip is no longer surrounded by a border. Any attempt to make a smaller SIM card will have an impact on the chip itself.

The difference in size between a nano-SIM and a micro-SIM card is the sole distinction. Both cards have the same chip.

It’s simple to get a micro SIM card trimmed down to a nano-SIM. Give heed to their measurements in size, which we’ve stated above.

Additionally, phones that have dual or hybrid SIM cards can now accommodate both Nano and Micro SIM cards.

Nano SIM cards are used on the majority of phones manufactured after 2012.

The iPhone 5 was the first Apple product to include a nano SIM card slot, which was released in September 2012.

Most network providers sell their SIM cards in a Multi-SIM format, which means they arrive in a regular SIM size that can be readily cut down to a micro SIM as well as a nano SIM card.

The option you select will be determined by the device into which you are putting the SIM card.

If you don’t know how to trim the SIM card to the size your device demands, such as standard to nano, standard to micro, or micro to nano, it’s advisable to ask for guidance from the network operator.

Other Differences between Nano and Micro SIM cards

Why have SIM cards decreased in size?

SIM cards have dropped in size primarily because the bits that were eliminated were essentially unused space, and space on a smartphone is limited. In order to free up more room for a bigger battery or other parts, a smaller SIM card slot is necessary.

Is there anything else that distinguishes SIM cards other than their size?

No, it’s only a matter of what phones they’ll fit in because of their different sizes.

When the phone is turned on, do not attempt to remove the SIM card. This could be unsafe for you because you’re handling the internal components of the phone. Furthermore, you risk damaging the SIM card unintentionally.

Wipe the gold chips on your SIM card gently with an eraser or cotton swab. Make small strokes until your SIM card is completely clean.

Try to wipe your SIM card clean with a clean towel. Do not use any cleaning supplies on the card or the cloth. This will clean any portion of the SIM card of dust, grease, and dampness.

Oldest University in the world

✔✔ Ask Awajis
Who Discovered Electricity?. The question of who discovered electricity has always been a source of controversy by historians…
✔✔ Ask Awajis
Hi! And welcome, today we are going to be talking about how to apply for Shell ASSA North…
✔✔ Ask Awajis
Airtel has unveiled the ‘Airtel unlimited ultra plan’ designed for modems, routers and mifi to offer 4G speedy…
✔✔ Ask Awajis
Jeff “Athlean X” Cavaliere is a celebrity fitness coach, popular for being the owner of ‘ATHLEAN-X.’ He holds…
✔✔ Ask Awajis
How to Check & Link Your NIN To Your Mobile Number in Nigeria: Within the week, one of…
✔✔ Ask Awajis
Hello guys, can we talk about Mambilla Plateau now? You’ll enjoy this article because it contains every detailed…